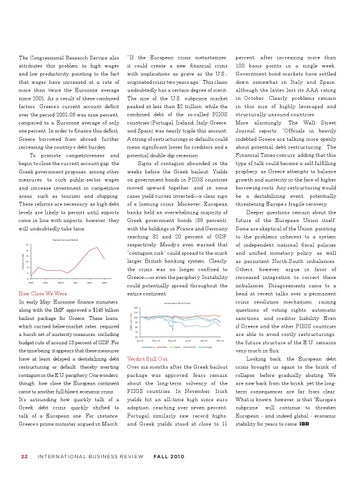 “If the European crisis metastasizes,

percent, after increasing more than

attributes this problem to high wages

it could create a new Ànancial crisis

100 basis points in a single week.

and low productivity, pointing to the fact

with implications as grave as the U.S.-

that wages have increased at a rate of

down somewhat in Italy and Spain,

more than twice the Eurozone average

undoubtedly has a certain degree of merit.

although the latter lost its A A A rating

since 2001. As a result of these combined

The size of the U.S. subprime market

peaked at less than $2 trillion, while the

in this mix of highly leveraged and

combined debt of the so-called PIIGS

compared to a Eurozone average of only

and Spain) was nearly triple this amount.

A string of restructurings or defaults could

mean signiÀcant losses for creditors and a

about potential debt restructuring.” The

Financial Times concurs, adding that this

Signs of contagion abounded in the

type of talk could become a self-fulÀ lling

Greek government proposes, among other

weeks before the Greek bailout. Yields

prophecy, as Greece attempts to balance

on government bonds in PIIGS countries

growth and austerity in the face of higher

and increase investment in competitive

moved upward together, and in some

borrowing costs. Any restructuring would

areas, such as tourism and shipping.

be a destabilizing event, potentially

These reforms are necessary, as high debt

of a looming crisis. Moreover, European

levels are likely to persist until exports

banks held an overwhelming majority of

Deeper questions remain about the

come in line with imports; however, they

future of the European Union itself.

with the holdings in France and Germany

Some are skeptical of the Union, pointing

to the problems inherent to a system

respectively. Moody’s even warned that

“contagion risk” could spread to the much

the crisis was no longer conÀ ned to

Others, however, argue in favor of

Greece—or even the periphery. Instability

increased integration to correct these

could potentially spread throughout the

imbalances. Disagreements came to a

head at recent talks over a permanent

How Close We Were In early May, Eurozone Ànance ministers,

which carried below-market rates, required a harsh set of austerity measures, including budget cuts of around 13 percent of GDP. For

if Greece and the other PIIGS countries

are able to avoid costly restructurings,

the time being, it appears that these measures

sanctions, and creditor liability. Even

bailout package for Greece. These loans,

along with the IMF, approved a $146 billion

the future structure of the E.U. remains very much in Áux.

have at least delayed a destabilizing debt

Over six months after the Greek bailout

crisis brought us again to the brink of

contagion in the E.U. periphery. One wonders,

collapse, before gradually abating. We

though, how close the European continent

about the long-term solvency of the

are now back from the brink, yet the long-

came to another full-blown economic crisis.

term consequences are far from clear.

It’s astounding how quickly talk of a

What is known, however, is that “Europe’s

talk of a European one. For instance,

and Greek yields stood at close to 11

stability for years to come. iBR

Looking back, the European debt