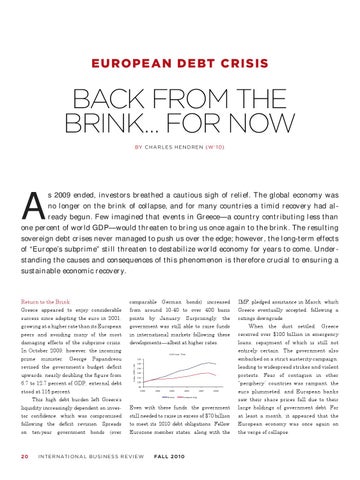 s 2009 ended, investors breathed a cautious sigh of relief. The global economy was no longer on the brink of collapse, and for many countries a timid recovery had already begun. Few imagined that events in Greece—a country contributing less than

one percent of world GDP—would threaten to bring us once again to the brink. The resulting sovereign debt crises never managed to push us over the edge; however, the long-term effects of “Europe’s subprime” still threaten to destabilize world economy for years to come. Understanding the causes and consequences of this phenomenon is therefore crucial to ensuring a sustainable economic recovery.

Return to the Brink

IMF, pledged assistance in March, which

success since adopting the euro in 2001,

points by January. Surprisingly, the

growing at a higher rate than its European

peers and avoiding many of the most

in international markets following these

received over $100 billion in emergency

damaging effects of the subprime crisis.

loans, repayment of which is still not

In October 2009, however, the incoming minister,

revised the government’s budget deÀcit upwards, nearly doubling the Àgure from 6.7 to 12.7 percent of GDP; external debt stood at 115 percent.

leading to widespread strikes and violent

protests. Fear of contagion in other

“periphery” countries was rampant, the

embarked on a strict austerity campaign,

euro plummeted, and European banks saw their share prices fall due to their

Even with these funds, the government

large holdings of government debt. For

tor conÀdence, which was compromised

still needed to raise in excess of $70 billion

at least a month, it appeared that the

to meet its 2010 debt obligations. Fellow

European economy was once again on

Eurozone member states, along with the

the verge of collapse.