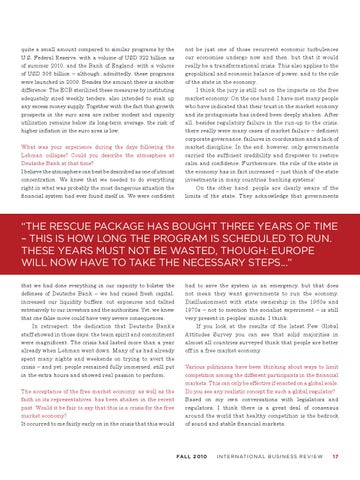 quite a small amount compared to similar programs by the U.S. Federal Reserve, with a volume of USD 322 billion as of summer 2010, and the Bank of England, with a volume of USD 306 billion – although, admittedly, these programs were launched in 2009. Besides the amount there is another difference: The ECB sterilized these measures by instituting adequately sized weekly tenders, also intended to soak up any excess money supply. Together with the fact that growth prospects in the euro area are rather modest and capacity utilization remains below its long-term average, the risk of higher inÁation in the euro area is low. What was your experience during the days following the Lehman collapse? Could you describe the atmosphere at Deutsche Bank at that time? I believe the atmosphere can best be described as one of utmost concentration. We knew that we needed to do everything right in what was probably the most dangerous situation the Ànancial system had ever found itself in. We were conÀdent

not be just one of those recurrent economic turbulences our economies undergo now and then, but that it would really be a transformational crisis. This also applies to the geopolitical and economic balance of power, and to the role of the state in the economy. I think the jury is still out on the impacts on the free market economy: On the one hand, I have met many people who have indicated that their trust in the market economy and its protagonists has indeed been deeply shaken. After all, besides regulatory failure in the run-up to the crisis, there really were many cases of market failure – deÀcient corporate governance, failures in coordination and a lack of market discipline. In the end, however, only governments carried the sufÀcient credibility and Àrepower to restore calm and conÀdence. Furthermore, the role of the state in the economy has in fact increased – just think of the state investments in many countries’ banking systems! On the other hand, people are clearly aware of the limits of the state. They acknowledge that governments

“THE RESCUE PACKAGE HAS BOUGHT THREE YEARS OF TIME – THIS IS HOW LONG THE PROGRAM IS SCHEDULED TO RUN. THESE YEARS MUST NOT BE WASTED, THOUGH: EUROPE WILL NOW HAVE TO TAKE THE NECESSARY STEPS...” that we had done everything in our capacity to bolster the defenses of Deutsche Bank – we had raised fresh capital, increased our liquidity buffers, cut exposures and talked extensively to our investors and the authorities. Yet, we knew that one false move could have very severe consequences. In retrospect, the dedication that Deutsche Bank’s staff showed in those days, the team spirit and commitment were magniÀcent. The crisis had lasted more than a year already when Lehman went down. Many of us had already spent many nights and weekends on trying to avert the crisis – and yet, people remained fully immersed, still put in the extra hours and showed real passion to perform. The acceptance of the free market economy, as well as the faith in its representatives, has been shaken in the recent past. Would it be fair to say that this is a crisis for the free market economy? It occurred to me fairly early on in the crisis that this would

had to save the system in an emergency, but that does not mean they want governments to run the economy. Disillusionment with state ownership in the 1960s and 1970s – not to mention the socialist experiment – is still very present in peoples’ minds, I think. If you look at the results of the latest Pew Global Attitudes Survey you can see that solid majorities in almost all countries surveyed think that people are better off in a free market economy. Various politicians have been thinking about ways to limit competition among the different participants in the Ànancial markets. This can only be effective if enacted on a global scale. Do you see any realistic concept for such a global regulator? Based on my own conversations with legislators and regulators, I think there is a great deal of consensus around the world that healthy competition is the bedrock of sound and stable Ànancial markets.