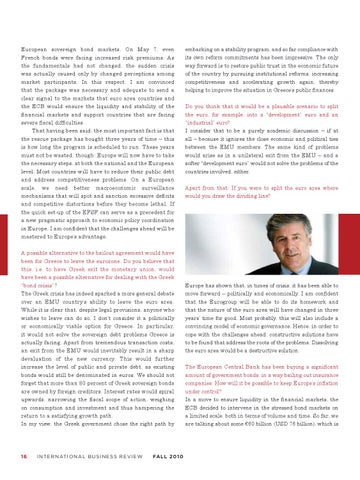 European sovereign bond markets. On May 7, even French bonds were facing increased risk premiums: As the fundamentals had not changed, the sudden crisis was actually caused only by changed perceptions among market participants. In this respect, I am convinced that the package was necessary and adequate to send a clear signal to the markets that euro area countries and the ECB would ensure the liquidity and stability of the Ànancial markets and support countries that are facing severe Àscal difÀculties. That having been said, the most important fact is that the rescue package has bought three years of time – this is how long the program is scheduled to run. These years must not be wasted, though: Europe will now have to take the necessary steps, at both the national and the European level. Most countries will have to reduce their public debt and address competitiveness problems. On a European scale, we need better macroeconomic surveillance mechanisms that will spot and sanction excessive deÀcits and competitive distortions before they become lethal. If the quick set-up of the EFSF can serve as a precedent for a new pragmatic approach to economic policy coordination in Europe, I am conÀdent that the challenges ahead will be mastered to Europe’s advantage. A possible alternative to the bailout agreement would have been for Greece to leave the eurozone. Do you believe that this, i.e. to have Greek exit the monetary union, would have been a possible alternative for dealing with the Greek “bond crisis”? The Greek crisis has indeed sparked a more general debate over an EMU country’s ability to leave the euro area. While it is clear that, despite legal provisions, anyone who wishes to leave can do so, I don’t consider it a politically or economically viable option for Greece. In particular, it would not solve the sovereign debt problems Greece is actually facing. Apart from tremendous transaction costs, an exit from the EMU would inevitably result in a sharp devaluation of the new currency. This would further increase the level of public and private debt, as existing bonds would still be denominated in euros. We should not forget that more than 80 percent of Greek sovereign bonds are owned by foreign creditors. Interest rates would spiral upwards, narrowing the Àscal scope of action, weighing on consumption and investment and thus hampering the return to a satisfying growth path. In my view, the Greek government chose the right path by

embarking on a stability program, and so far compliance with its own reform commitments has been impressive. The only way forward is to restore public trust in the economic future of the country by pursuing institutional reforms, increasing competitiveness and accelerating growth again, thereby helping to improve the situation in Greece’s public Ànances. Do you think that it would be a plausible scenario to split the euro, for example, into a “development” euro and an “industrial” euro? I consider that to be a purely academic discussion – if at all – because it ignores the close economic and political ties between the EMU members. The same kind of problems would arise as in a unilateral exit from the EMU – and a softer “development euro” would not solve the problems of the countries involved, either. Apart from that: If you were to split the euro area where would you draw the dividing line?

Europe has shown that, in times of crisis, it has been able to move forward – politically and economically. I am conÀdent that the Eurogroup will be able to do its homework and that the nature of the euro area will have changed in three years’ time for good. Most probably, this will also include a convincing model of economic governance. Hence, in order to cope with the challenges ahead, constructive solutions have to be found that address the roots of the problems. Dissolving the euro area would be a destructive solution. The European Central Bank has been buying a signiÀcant amount of government bonds, in a way bailing out insurance companies. How will it be possible to keep Europe’s inÁation under control? In a move to ensure liquidity in the Ànancial markets, the ECB decided to intervene in the stressed bond markets on a limited scale, both in terms of volume and time. So far, we are talking about some €60 billion (USD 76 billion), which is