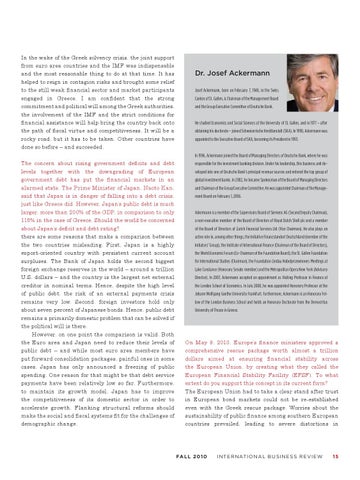 In the wake of the Greek solvency crisis, the joint support from euro area countries and the IMF was indispensable and the most reasonable thing to do at that time. It has helped to reign in contagion risks and brought some relief to the still weak Ànancial sector and market participants engaged in Greece. I am conÀdent that the strong commitment and political will among the Greek authorities, the involvement of the IMF and the strict conditions for Ànancial assistance will help bring the country back onto the path of Àscal virtue and competitiveness. It will be a rocky road, but it has to be taken. Other countries have done so before – and succeeded.

Dr. Josef Ackermann Josef Ackermann, born on February 7, 1948, in the Swiss Canton of St. Gallen, is Chairman of the Management Board and the Group Executive Committee of Deutsche Bank.

He studied Economics and Social Sciences at the University of St. Gallen, and in 1977 – after obtaining his doctorate – joined Schweizerische Kreditanstalt (SKA). In 1990, Ackermann was appointed to the Executive Board of SKA, becoming its President in 1993.

In 1996, Ackermann joined the Board of Managing Directors of Deutsche Bank, where he was

The concern about rising government deÀcits and debt levels together with the downgrading of European government debt has put the Ànancial markets in an alarmed state. The Prime Minister of Japan, Naoto Kan, said that Japan is in danger of falling into a debt crisis, just like Greece did. However, Japan’s public debt is much larger, more than 200% of the GDP, in comparison to only 115% in the case of Greece. Should the world be concerned about Japan’s deÀcit and debt rating? there are some reasons that make a comparison between the two countries misleading. First, Japan is a highly export-oriented country with persistent current account surpluses. The Bank of Japan holds the second biggest foreign exchange reserves in the world – around a trillion U.S. dollars – and the country is the largest net external creditor in nominal terms. Hence, despite the high level of public debt, the risk of an external payments crisis remains very low. Second, foreign investors hold only about seven percent of Japanese bonds. Hence, public debt remains a primarily domestic problem that can be solved if the political will is there. However, on one point the comparison is valid. Both the Euro area and Japan need to reduce their levels of public debt – and while most euro area members have put forward consolidation packages, painful ones in some cases, Japan has only announced a freezing of public spending. One reason for that might be that debt service payments have been relatively low so far. Furthermore, to maintain its growth model, Japan has to improve the competitiveness of its domestic sector in order to accelerate growth. Flanking structural reforms should make the social and Àscal systems Àt for the challenges of demographic change.

responsible for the investment banking division. Under his leadership, this business unit developed into one of Deutsche Bank’s principal revenue sources and entered the top group of global investment banks. In 2002, he became Spokesman of the Board of Managing Directors and Chairman of the Group Executive Committee. He was appointed Chairman of the Management Board on February 1, 2006.

Ackermann is a member of the Supervisory Board of Siemens AG (Second Deputy Chairman), a non-executive member of the Board of Directors of Royal Dutch Shell plc and a member of the Board of Directors of Zurich Financial Services Ltd (Vice Chairman). He also plays an active role in, among other things, the Initiative Finanzstandort Deutschland (member of the Initiators’ Group), the Institute of International Finance (Chairman of the Board of Directors), the World Economic Forum (Co-Chairman of the Foundation Board), the St. Gallen Foundation for International Studies (Chairman), the Foundation Lindau Nobelprizewinners Meetings at Lake Constance (Honorary Senate member) and the Metropolitan Opera New York (Advisory Director). In 2007, Ackermann accepted an appointment as Visiting Professor in Finance at the London School of Economics. In July 2008, he was appointed Honorary Professor at the Johann Wolfgang Goethe University Frankfurt. Furthermore, Ackermann is an Honorary Fellow of the London Business School and holds an Honorary Doctorate from the Democritus University of Thrace in Greece.

On May 9, 2010, Europe’s Ànance ministers approved a comprehensive rescue package worth almost a trillion dollars aimed at ensuring Ànancial stability across the European Union, by creating what they called the European Financial Stability Facility (EFSF). To what extent do you support this concept in its current form? The European Union had to take a clear stand after trust in European bond markets could not be re-established even with the Greek rescue package. Worries about the sustainability of public Ànance among southern European countries prevailed, leading to severe distortions in