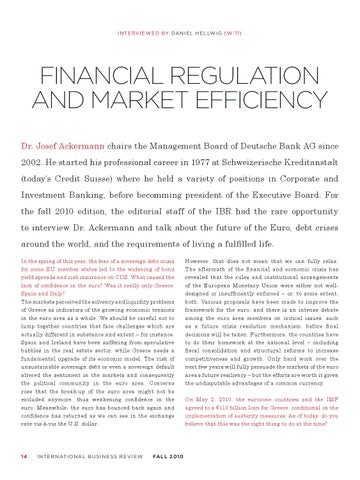 FINANCIAL REGULATION AND MARKET EFFICIENCY Dr. Josef Ackermann chairs the Management Board of Deutsche Bank AG since 2002. He started his professional career in 1977 at Schweizerische Kreditanstalt (today’s Credit Suisse) where he held a variety of positions in Corporate and Investment Banking, before becomming president of the Executive Board. For the fall 2010 edition, the editorial staff of the IBR had the rare opportunity to interview Dr. Ackermann and talk about the future of the Euro, debt crises around the world, and the requirements of living a fulÀ lled life. In the spring of this year, the fear of a sovereign debt crisis for some EU member states led to the widening of bond yield spreads and risk insurance on CDS. What caused the lack of conÀdence in the euro? Was it really only Greece, Spain and Italy? The markets perceived the solvency and liquidity problems of Greece as indicators of the growing economic tensions in the euro area as a whole. We should be careful not to lump together countries that face challenges which are actually different in substance and extent – for instance, Spain and Ireland have been suffering from speculative bubbles in the real estate sector, while Greece needs a fundamental upgrade of its economic model. The risk of unsustainable sovereign debt or even a sovereign default altered the sentiment in the markets and consequently the political community in the euro area. Concerns rose that the break-up of the euro area might not be excluded anymore, thus weakening conÀdence in the euro. Meanwhile, the euro has bounced back again and conÀdence has returned as we can see in the exchange rate vis-à-vis the U.S. dollar.

However, that does not mean that we can fully relax. The aftermath of the Ànancial and economic crisis has revealed that the rules and institutional arrangements of the European Monetary Union were either not welldesigned or insufÀciently enforced – or, to some extent, both. Various proposals have been made to improve the framework for the euro, and there is an intense debate among the euro area members on critical issues, such as a future crisis resolution mechanism, before À nal decisions will be taken. Furthermore, the countries have to do their homework at the national level – including Àscal consolidation and structural reforms to increase competitiveness and growth. Only hard work over the next few years will fully persuade the markets of the euro area’s future resiliency – but the efforts are worth it given the undisputable advantages of a common currency. On May 2, 2010, the eurozone countries and the IMF agreed to a €110 billion loan for Greece, conditional on the implementation of austerity measures. As of today, do you believe that this was the right thing to do at the time?