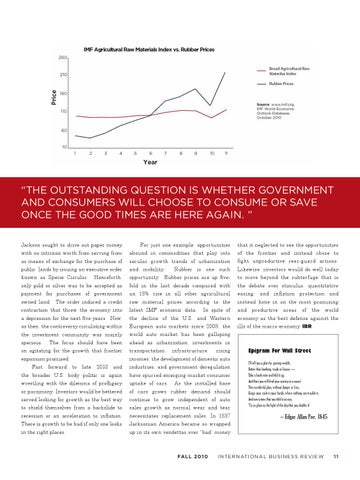 “THE OUTSTANDING QUESTION IS WHETHER GOVERNMENT AND CONSUMERS WILL CHOOSE TO CONSUME OR SAVE ONCE THE GOOD TIMES ARE HERE AGAIN. ” Jackson sought to drive out paper money

For just one example, opportunities

that it neglected to see the opportunities

with no intrinsic worth from serving from

abound in commodities that play into

of the frontier and instead chose to

as means of exchange for the purchase of

Rubber is one such

Likewise, investors would do well today

opportunity. Rubber prices are up Àve-

to move beyond the subterfuge that is

only gold or silver was to be accepted as

fold in the last decade compared with

the debate over stimulus, quantitative

payment for purchases of government

an 18% rise in all other agricultural

easing, and inÁ ation protection and

raw material prices according to the

instead hone in on the most promising

contraction that threw the economy into

a depression for the next Àve years. Now,

the decline of the U.S. and Western

economy as the best defense against the

as then, the controversy circulating within

European auto markets since 2008, the

ills of the macro economy. iBR

the investment community was mainly

world auto market has been galloping

ahead as urbanization, investments in

The focus should have been

on agitating for the growth that frontier

incomes, the development of domestic auto

wrestling with the dilemma of proÁigacy

or parsimony, Investors would be bettered

of cars grows rubber demand should

served looking for growth as the best way

continue to grow independent of auto

to shield themselves from a backslide to

recession or an acceleration to inÁation.

There is growth to be had if only one looks

in the right places.

up in its own vendettas over “bad” money

As the installed base

Epigram For Wall Street I‘ll tell you a plan for gaining wealth, Better than banking, trade or leases — Take a bank note and fold it up, And then you will find your money in creases! This wonderful plan, without danger or loss, Keeps your cash in your hands, where nothing can trouble it; And every time that you fold it across, ‘Tis as plain as the light of the day that you double it!