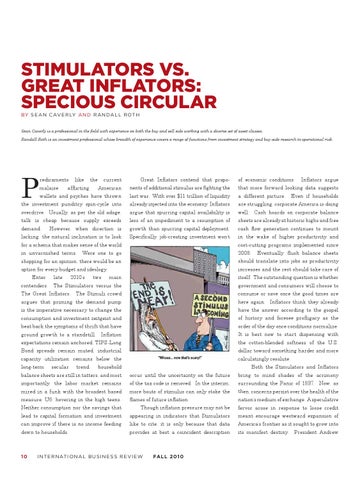 STIMULATORS VS. GREAT INFLATORS: SPECIOUS CIRCULAR BY S E A N C AV E R LY A N D R A N DA L L R OT H Sean Caverly is a professional in the Àeld with experience on both the buy and sell side working with a diverse set of asset classes. Randall Roth is an investment professional whose breadth of experience covers a range of functions from investment strategy and buy-side research to operational risk.

nents of additional stimulus are Àghting the

wallets and psyches have thrown

last war. With over $11 trillion of liquidity

the investment punditry spin-cycle into

already injected into the economy, InÁators

are struggling, corporate America is doing

overdrive. Usually, as per the old adage,

argue that spurring capital availability is

talk is cheap because supply exceeds

less of an impediment to a resumption of

sheets are already at historic highs and free

However, when direction is

lacking, the natural inclination is to look

for a schema that makes sense of the world in unvarnished terms.

Were one to go

shopping for an opinion, there would be an

should translate into jobs as productivity

option for every budget and ideology.

increases and the rest should take care of main

itself. The outstanding question is whether

The Stimulators versus the

government and consumers will choose to

The Great InÁators. The Stimuli crowd

consume or save once the good times are

argues that priming the demand pump

is the imperative necessary to change the

have the answer according to the gospel

consumption and investment zeitgeist and

of history and foresee proÁigacy as the

beat back the symptoms of thrift that have

order of the day once conditions normalize.

ground growth to a standstill. InÁation

It is best now to start dispensing with

the cotton-blended softness of the U.S.

dollar toward something harder and more

capacity utilization remains below the

Both the Stimulators and InÁators

balance sheets are still in tatters, and most

occur until the uncertainty on the future

bring to mind shades of the acrimony

of the tax code is removed. In the interim,

mired in a funk with the broadest based

more bouts of stimulus can only stoke the

then, concerns persist over the health of the

measure, U6, hovering in the high teens.

nation’s medium of exchange. A speculative

Neither consumption nor the savings that

Though inÁation pressure may not be

lead to capital formation and investment

appearing in indicators that Stimulators

can improve if there is no income feeding

like to cite, it is only because that data

America’s frontier as it sought to grow into

provides at best a coincident description