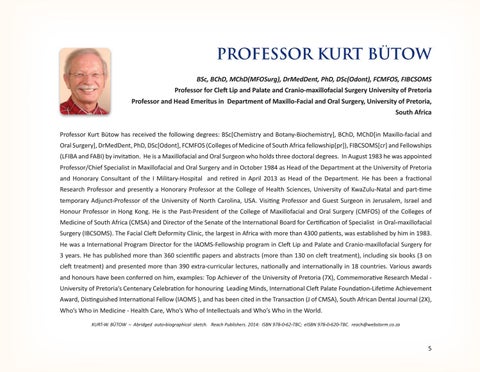 Professor Kurt Bütow BSc, BChD, MChD(MFOSurg), DrMedDent, PhD, DSc(Odont), FCMFOS, FIBCSOMS Professor for Cleft Lip and Palate and Cranio-maxillofacial Surgery University of Pretoria Professor and Head Emeritus in Department of Maxillo-Facial and Oral Surgery, University of Pretoria, South Africa Professor Kurt Bütow has received the following degrees: BSc[Chemistry and Botany-Biochemistry], BChD, MChD[in Maxillo‑facial and Oral Surgery], DrMedDent, PhD, DSc[Odont], FCMFOS (Colleges of Medicine of South Africa fellowship[pr]), FIBCSOMS[cr] and Fellowships (LFIBA and FABI) by invitation. He is a Maxillofacial and Oral Surgeon who holds three doctoral degrees. In August 1983 he was appointed Professor/Chief Specialist in Maxillofacial and Oral Surgery and in October 1984 as Head of the Department at the University of Pretoria and Honorary Consultant of the I Military-Hospital and retired in April 2013 as Head of the Department. He has been a fractional Research Professor and presently a Honorary Professor at the College of Health Sciences, University of KwaZulu-Natal and part-time temporary Adjunct-Professor of the University of North Carolina, USA. Visiting Professor and Guest Surgeon in Jerusalem, Israel and Honour Professor in Hong Kong. He is the Past-President of the College of Maxillofacial and Oral Surgery (CMFOS) of the Colleges of Medicine of South Africa (CMSA) and Director of the Senate of the International Board for Certification of Specialist in Oral-maxillofacial Surgery (IBCSOMS). The Facial Cleft Deformity Clinic, the largest in Africa with more than 4300 patients, was established by him in 1983. He was a International Program Director for the IAOMS-Fellowship program in Cleft Lip and Palate and Cranio-maxillofacial Surgery for 3 years. He has published more than 360 scientific papers and abstracts (more than 130 on cleft treatment), including six books (3 on cleft treatment) and presented more than 390 extra-curricular lectures, nationally and internationally in 18 countries. Various awards and honours have been conferred on him, examples: Top Achiever of the University of Pretoria (7X), Commemorative Research Medal University of Pretoria’s Centenary Celebration for honouring Leading Minds, International Cleft Palate Foundation-Lifetime Achievement Award, Distinguished International Fellow (IAOMS ), and has been cited in the Transaction (J of CMSA), South African Dental Journal (2X), Who’s Who in Medicine - Health Care, Who’s Who of Intellectuals and Who’s Who in the World. KURT-W. BÜTOW – Abridged auto-biographical sketch. Reach Publishers. 2014: ISBN 978-0-62-TBC; eISBN 978-0-620-TBC. reach@webstorm.co.za 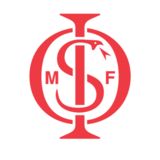