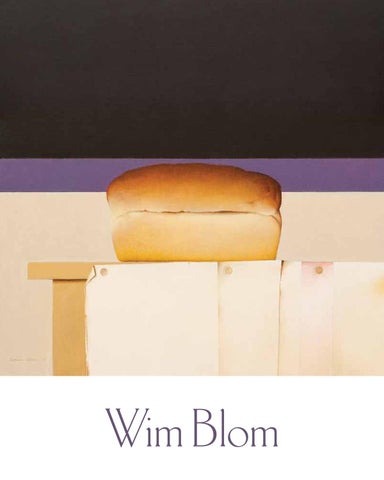 Delacroix said that a painting must ravish the eyes... and Rachmaninoff maintained that music must exalt. When the arts do not deliver on such levels, we stand bereft. Wim Blom - Journal - December 2, 1992

In a painting I look for a civilised mind at work. The result should reflect carefully selected contents, be well-finished revealing acute observation, taste, sensitivity and impact. If these qualities are badly balanced, or any of them absent, the end product is invariably second rate - or worse. Wim Blom - Journal - October 30, 1998

I looked at your London exhibition twice, Wim, and each time I realised that you have added a dimension to my life. Letter from Rachel Tennyson

In character, in manners, in style, in all things the supreme excellence is simplicity. Henry Wadsworth Longfellow

To study Wim Blom’s painting is to enter a beautifully conceived secret world of still life and interiors. The uncluttered world is subtly structured and balanced. In its cool, ordered stillness it seems infinitely less ephemeral than the fleeting world of appearances from which it borrows objects, shadows, sensations of colour, form, proportion, and light and shade. It is a gently luminous world. The scale is small and intimate and there is a rare sense of tone. An element of mystery pervades the work. A delicate balance is struck between perception and conception, but in the final analysis what is interesting about Blom’s work is the considerable extent to which it is a construct of the artist’s mind, or more accurately perhaps, a projection of his inner life as opposed to a mere reflection of selected aspects of the visible world. For proof of this it is only necessary to compare the collages with the oil paintings, Despite the enormous difference of procedure and technique, both reinforce each other by expressing exactly the same sensibility. The same poetic vision unifies them. At a time when Modernism, Post-Modernism and Anti-Modernism struggle for attention, and perhaps survival, it becomes increasingly necessary to take each artist on his own merits. Is the art of Wim Blom to be placed in a category? His early paintings were described as Expressionist. In 1986 Alain Vignaut, in a catalogue introduction, classed him with wise reservations as a realist (the small r is unconventional, but no doubt deliberate). “Today realism in painting is a movement that is deeply divided in its outlook. It embraces many contradictory aspirations, flouts many modernist pieties and has already, in a relatively short time, generated controversy even within its own ranks. For these reasons, Wim Blom, who paints in a style which must be called realist, mistrusts fashion and the vagaries of critical taste. In general, however, he has succeeded in maintaining his independence from the principal trends that can at present be included under the heading of realism”. Realism as an art historical category has long been a blunt instrument with which to pin down individuals. At a deeper level there remains the philosophical problem of defining reality. Whether they wish to or not, paintings such as Wim Blom’s, which so successfully and beautifully capture small esoteric corners of the visible world have a paradoxical tendency to raise the question: “What exactly is reality; how far is it subjective or objective? A painting cannot answer a philosophical question on its own physical terms. An enigma remains and with it a metaphysical dimension to the paintings of Wim Blom.

To look at Wim Blom’s paintings initially is to see perfectly depicted, passive objects, chosen for their pictorial potentialities from the artist’s distinctive, private, everyday world. It happens to be the world of a scholarly, well-read, multilingual, widely travelled South African émigré of Dutch descent who has settled in Canada. His paintings in the present exhibition are quite clearly the work of a modern artist, the product of a sophisticated late twentieth century sensibility. The visual and psychological intensity in which [Deserted beach] (cat. no.3) is realised on canvas, and the design and precise geometry of [Mantel-shelf] (cat. no.9) are unmistakably modern in spirit, concept and style. At the same time it is clear that Wim Blom is far from turning his back on the past either in art or life. His work reveals a love of drawing, an unfashionable capacity for careful preparation and meticulous craftsmanship and a successfully digested knowledge of art history. “What he has always admired most in the work of his preferred sixteenth century masters, he has tried to make the foundation of his own painting” (Alan Vignaud, 1986). Wim Blom’s work contains a reminder that the past may remain a beneficial influence on as well as a potent constituent of the present. Blom’s choice of subject matter is surely deliberate and having been chosen it is orchestrated with care. Is there any significance in the fact that almost all the objects depicted here are inanimate? One explanation is the practical one that lifeless objects make impeccably motionless models. My guess is that the artist wishes to breathe life, not necessarily into a particular subject or object, as Morandi, for example breathes life into painting of jars and vases. The vitality of art is of a different order from the vitality of nature. In Wim Blom’s case to appropriate the life from a living thing would be to destroy the general feeling of mood of the pictures shown here. Despite the lack of animate objects, there is the atmosphere in all the paintings of a lived-in environment rather that an artists’s studio. Human presence, especially the presence of the artist himself, is implicit. Whereas a photograph tends to repay a glance which lasts no longer than the length of the exposure, even a modest sized rectangle of canvas slowly and thoroughly covered with thin glazes of oil paint until the image is brought to completion, repays being looked at again and again. To look at a painting by Wim Blom is an invitation to meditate. It could be said that the actual painting of these pictures involved a prolonged form of meditation. In Blom’s case no evidence remains of the effort and pain that inevitably accompanies the birth of any work of art. The spectator is drawn by empathy towards the artist’s unique mentality which includes his profound skill and patience in making and watching a work of art grow to completion.

The above review, written for the catalogue of Wim Blom’s London exhibition, displays insight as valid today as at the time of writing. Publishing the review in this catalogue for his Vancouver exhibition, is a gesture of respect and admiration and expresses Wim Blom’s gratitude to Mark Glazenbrook.

Leeks on a copper vessel

Study for a still life

Receipt for reparations in 1802