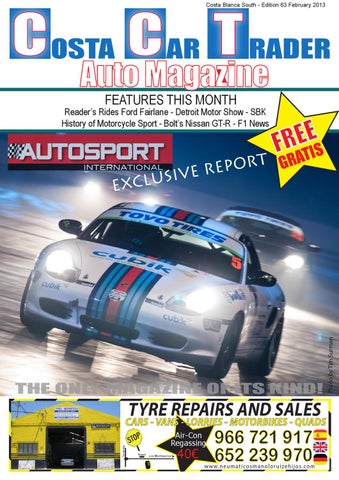 THE ONLY MAGAZINE OF ITS KIND!

We’ve gone all American again - yes, it can’t be helped, we see what’s on offer at the annual Detroit Motor Show and feature a true American beauty here on the Costa Blanca that you may have seen around at some of the local car events. We have an exclusive report on the thrilling Autosport International event which took place last month in the UK. Tim Surman shares his findings and photos from the show. Jill Carter delves into the history of motorcycle sport, with a fascinating look at where it all began and what there is on offer nowadays. Usain Bolt shows us a car modified in his name - what a great marketing idea. We have a brand new hypercar that is set to become the most expensive and fastest car ever and the first from the Arab states, see what you think on page 20. There’s a new cruise starting in the area, so make sure you are there - find all the details on the local page (18). We look at F1’s Mr Nice, Damon Hill and see who and whats been moving in the world of F1. If you are young and yearning to get behind the wheel, we have a selection of cars you can drive at 14 here in Spain, yes I said 14! No more Mum and Dad taxis! Happy motoring! Professor

Please note: We can only accept advertisers in, or relating to, the motor industry or from companies offering services and products to vehicle owners, potential owners, enthusiasts and motorsport followers. The publisher accepts no responsibility for the products and services advertised or any mistakes or misprints. Reproduction in part or whole is prohibited without permission from the publisher.

When you have finished with this magazine please recycle it.

TRADING SINCE 1999 Official agents of

OTHER SERVICES UPON REQUEST

A one-off Nissan GT-R has been built to raise money for the Usain Bolt Foundation, it was unveiled at the Detroit Motor Show last month. It was sold at auction on eBay for an amazing price of $187,100 around £116k In October Bolt was appointed Nissan's honorary "Director of Excitement" B o l t said: "My partnership with N i s s a n benefits my Foundation. This don a t i o n will help many kids h a v e b e t t e r facilit ies.

Don’t forget.. 50€ Off with Autotune if you mention the Costa Car Trader

Costa Cars Expand Their Business Alister and William at Costa Cars, La Zenia are pleased to announce their expansion into new premises just along from their existing forecourt. With both areas displaying cars, they have a lot more available for you to choose from. Costa Cars have been in business for 5 years offering good quality late model cars and have built up an outstanding reputation, with their customers returning time and time again, whenever they want to update their car. The majority of their business is from recommendations, a true reflection of their service. You can read many testimonials from satisfied customers on their website. You can or contact

They have around 60 cars available to buy, each one comes with a full guarantee to give you security and piece of mind. All the cars are fully serviced, ITV’d, taxed and all documents are transferred into your name. This is all included in the price. With no hidden extras, the price you see is the price you pay. They also have courtesy cars available if in the unlikely event your vehicle needs attention.

Costa Cars are always looking to buy good quality nearly new cars for cash as well as taking your car in part exchange. If you are looking for that special something, a particular car, they can source it for you, just let them know what you want and they will find it. They have a sale on at the moment, so go along and start your New Year with a new car.

Costa Cars have a fully functional See their advert always on page S3 workshop, and can offer servicing in the Costa Car Trader or view or repairs to your vehicle with their their complete stock online at qualified mechanic. Costa Car's www.costacars.es staff speak English, Spanish, French, German, Russian and We wish them continued success Romania. into the future. find Costa Cars on the N-332 at La Zenia them on: 966 730 116 / 672 072 720 or email costacars@gmail.com

The Peel P50 is officially the world's smallest car. Originally made in the 60s, it's being made once again with the involvement of former Dragons' Den entrepreneur James Caan. Being a 50cc, it fits the bill, but priced at £10,000, it's very expensive and I can't imagine any teenager actually wanting one, unless they want to get beaten up.

Last month, a new law came into effect in the UK that allows 16-year-olds to drive lightweight microcars with a top speed of 28mph. In Spain kids of 14 can drive these microcars, as long as they are powered by no more than a 50cc engine and the drvier has passed a theoretical highway code test. Here's our pick of what’s available.

We have all followed an Aixam on the Spanish roads, but look what they've done to it! Every teenagers dream, a pimped up car they can drive. So it's never going to win at traffic Aspiring youths wanting to do lights, but it is certainly the coolest some moonlighting may find drive around for the youth of today. this Piaggio Ape Cross Country Only one setback: You need to be 18 just the ticket. Ape is Italian to carry passengers in it and who for bee and have been buzzing wants to turn up at a discoteca soloaround (!) since the 60s and mente? best remembered by parents and grandparents as what Inspector Clouseau drove into a swimming pool. Priced around £5,000, it’s a great deal and looks good too.

We are the Costa Blanca’s leading car sales specialists.

PERFORMANCE & DIESEL CENTRE Motor Engineers of Guardamar & Santa Pola All makes, petrol and diesel, serviced and repaired. GUARDAMAR - This 500m2 centre offers a high quality engineering service, including Head Gaskets, Engine Re-conditioning, Manual gearbox repairs, Timing Belts, Clutches, Brakes, Welding, Air con Regas, Exhausts, Batteries, pre ITV Inspections and ITV tests. We also have up to date Bosch diagnostic equipment. We are the only English garage in Guardamar and now in our 6th year of trading. Our reputation has been built on our expertise, quality of service and competitive prices. So please give us a ring on the following numbers.

SANTA POLA - At our centre on the Industrial Estate, we can service and repair any make of vehicle from a motorbike to Motor home. This includes Head gaskets, Clutches, Brakes, Welding, Exhausts and Batteries, Servicing, pre ITV Inspections and ITV tests, and use up to date diagnostic equipment. We have an experienced vehicle technician, Tom May, who has joined us from Mercedes, Alicante, and you will receive a first class service from him. For further information, do not hesitate to give us a ring for expert and friendly advice.

The North American International Auto Show or the Detroit Motor Show as we call it, had its fair share of American muscle and we look more at those cars that will make it into the European market.

Hyundai have made this HCD-14 Genesis concept with rearhinged doors at the back and no B-pillar and a 5.0-litre V8 engine. Nice.

This Tesla is an all-electric 7 seater SUV that has a pair of gullwing rear doors and will accelerate from 0 - 6 0 m p h quicker than a 400hp Porsche 911 Carrera S. Star of the Show The Chevrolet Corvette C7 has revived the legendary Stingray name, last used in 1976. Left-hand drive imports are expected in Europe later this year, with a price tag of around €60,000.

The Infiniti Q50 is a luxury saloon with elegant styling and will be priced like the Lexus. The Lexus IS is similar to the concept shown last year and retains the sexy hourglass grill. Available later this year in Europe with 2.5l V6’s, expect to pay around €35,000. 8