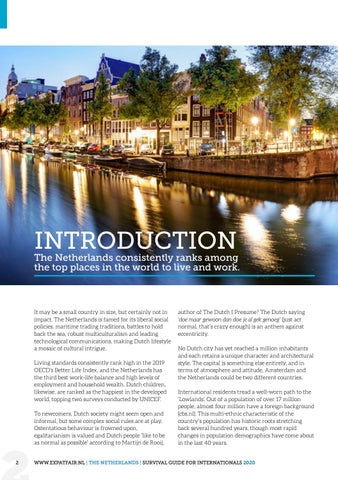 The Netherlands consistently ranks among the top places in the world to live and work.

It may be a small country in size, but certainly not in impact. The Netherlands is famed for its liberal social policies, maritime trading traditions, battles to hold back the sea, robust multiculturalism and leading technological communications, making Dutch lifestyle a mosaic of cultural intrigue. Living standards consistently rank high in the 2019 OECD’s Better Life Index, and the Netherlands has the third best work-life balance and high levels of employment and household wealth. Dutch children, likewise, are ranked as the happiest in the developed world, topping two surveys conducted by UNICEF. To newcomers, Dutch society might seem open and informal, but some complex social rules are at play. Ostentatious behaviour is frowned upon, egalitarianism is valued and Dutch people ‘like to be as normal as possible’ according to Martijn de Rooij,

author of The Dutch I Presume? The Dutch saying ‘doe maar gewoon dan doe je al gek genoeg’ (just act normal, that’s crazy enough) is an anthem against eccentricity. No Dutch city has yet reached a million inhabitants and each retains a unique character and architectural style. The capital is something else entirely, and in terms of atmosphere and attitude, Amsterdam and the Netherlands could be two different countries. International residents tread a well-worn path to the ‘Lowlands’. Out of a population of over 17 million people, almost four million have a foreign background (cbs.nl). This multi-ethnic characteristic of the country’s population has historic roots stretching back several hundred years, though most rapid changes in population demographics have come about in the last 40 years.