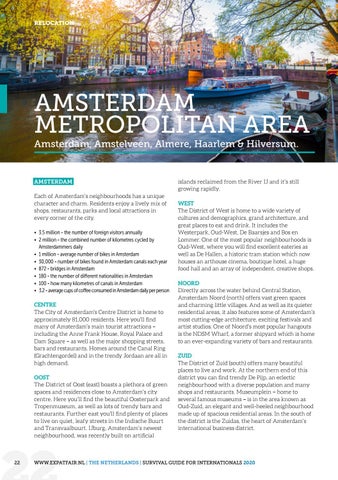 AMSTERDAM Each of Amsterdam’s neighbourhoods has a unique character and charm. Residents enjoy a lively mix of shops, restaurants, parks and local attractions in every corner of the city. • 3.5 million - the number of foreign visitors annually • 2 million - the combined number of kilometres cycled by Amsterdammers daily • 1 million - average number of bikes in Amsterdam • 30,000 - number of bikes found in Amsterdam canals each year • 872 - bridges in Amsterdam • 180 - the number of different nationalities in Amsterdam • 100 - how many kilometres of canals in Amsterdam • 3.2 - average cups of coffee consumed in Amsterdam daily per person CENTRE The City of Amsterdam's Centre District is home to approximately 81,000 residents. Here you’ll find many of Amsterdam’s main tourist attractions – including the Anne Frank House, Royal Palace and Dam Square – as well as the major shopping streets, bars and restaurants. Homes around the Canal Ring (Grachtengordel) and in the trendy Jordaan are all in high demand. OOST The District of Oost (east) boasts a plethora of green spaces and residences close to Amsterdam’s city centre. Here you’ll find the beautiful Oosterpark and Tropenmuseum, as well as lots of trendy bars and restaurants. Further east you’ll find plenty of places to live on quiet, leafy streets in the Indische Buurt and Transvaalbuurt. IJburg, Amsterdam’s newest neighbourhood, was recently built on artificial

islands reclaimed from the River IJ and it’s still growing rapidly. WEST The District of West is home to a wide variety of cultures and demographics, grand architecture, and great places to eat and drink. It includes the Westerpark, Oud-West, De Baarsjes and Bos en Lommer. One of the most popular neighbourhoods is Oud-West, where you will find excellent eateries as well as De Hallen, a historic tram station which now houses an arthouse cinema, boutique hotel, a huge food hall and an array of independent, creative shops. NOORD Directly across the water behind Central Station, Amsterdam Noord (north) offers vast green spaces and charming little villages. And as well as its quieter residential areas, it also features some of Amsterdam’s most cutting-edge architecture, exciting festivals and artist studios. One of Noord’s most popular hangouts is the NDSM Wharf, a former shipyard which is home to an ever-expanding variety of bars and restaurants. ZUID The District of Zuid (south) offers many beautiful places to live and work. At the northern end of this district you can find trendy De Pijp, an eclectic neighbourhood with a diverse population and many shops and restaurants. Museumplein – home to several famous museums – is in the area known as Oud-Zuid, an elegant and well-heeled neighbourhood made up of spacious residential areas. In the south of the district is the Zuidas, the heart of Amsterdam’s international business district.