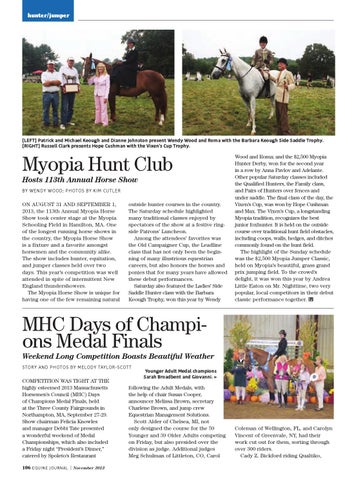 On August 31 and September 1, 2013, the 113th Annual Myopia Horse Show took center stage at the Myopia Schooling Field in Hamilton, MA. One of the longest running horse shows in the country, the Myopia Horse Show is a fixture and a favorite amongst horsemen and the community alike. The show includes hunter, equitation, and jumper classes held over two days. This year’s competition was well attended in spite of intermittent New England thundershowers. The Myopia Horse Show is unique for having one of the few remaining natural

outside hunter courses in the country. The Saturday schedule highlighted many traditional classes enjoyed by spectators of the show at a festive ringside Patrons’ Luncheon. Among the attendees’ favorites was the Old Campaigner Cup, the Leadline class that has not only been the beginning of many illustrious equestrian careers, but also honors the horses and ponies that for many years have allowed these debut performances. Saturday also featured the Ladies’ Side Saddle Hunter class with the Barbara Keough Trophy, won this year by Wendy

Wood and Roma; and the $2,500 Myopia Hunter Derby, won for the second year in a row by Anna Pavlov and Adelante. Other popular Saturday classes included the Qualified Hunters, the Family class, and Pairs of Hunters over fences and under saddle. The final class of the day, the Vixen’s Cup, was won by Hope Cushman and Max. The Vixen’s Cup, a longstanding Myopia tradition, recognizes the best junior foxhunter. It is held on the outside course over traditional hunt field obstacles, including coops, walls, hedges, and ditches commonly found on the hunt field. The highlight of the Sunday schedule was the $2,500 Myopia Jumper Classic, held on Myopia’s beautiful, grass grand prix jumping field. To the crowd’s delight, it was won this year by Andrea Little Eaton on Mr. Nighttime, two very popular, local competitors in their debut classic performance together.

following the Adult Medals, with the help of chair Susan Cooper, announcer Melissa Brown, secretary Charlene Brown, and jump crew Equestrian Management Solutions. Scott Alder of Chelsea, MI, not only designed the course for the 59 Younger and 39 Older Adults competing on Friday, but also presided over the division as judge. Additional judges Meg Schulman of Littleton, CO, Carol

Coleman of Wellington, FL, and Carolyn Vincent of Greenvale, NY, had their work cut out for them, sorting through over 300 riders. Cady Z. Bickford riding Qualtiko,