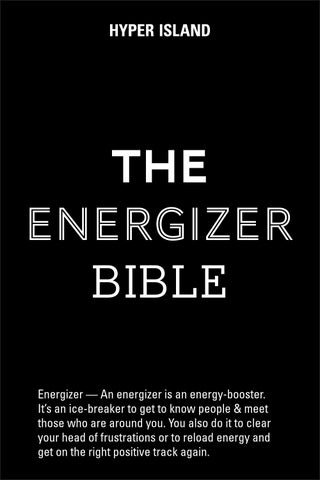 THE ENERGIZER BIBLE Energizer â&amp;#x20AC;&amp;#x201D; An energizer is an energy-booster. Itâ&amp;#x20AC;&amp;#x2122;s an ice-breaker to get to know people &amp; meet those who are around you. You also do it to clear your head of frustrations or to reload energy and get on the right positive track again.

how it works: Stands in a circle. One person starts of by shouting ‘NIPPON!!’ while making an angry face, a downwards O with both arms and bends the knees. After this, the others in the circle copy this. Then, the NIPPON-initiator starts air-punching someone next to him using a ‘Huh’ sound. The receiver copies this. The receivers neighbor can do the same or choose to throw a spell across the circle. This happens by raising the hands above the head and throwing an imaginary item to that person while shouting “ATANAMA!’. The receiver has to defend ‘his house’ by raising his hands above the head and make a roof shape while shouting “SINSEI KINOMO!” and bend the knees. If the receiver hesitates or uses the wrong words, he is out of the game. Before leaving, he needs to dance a humiliating dance. After a person is kicked out, anyone can start the game again.

#2 do you love your neighbor?

how it works: Everyone sits in a circle on chairs. One person in the middle asks someone: “Do you love your neighbor?”. You can reply with YES or NO. Replying YES means that the 2 people sitting to your left and right need to switch seats. The person in the middle needs to obtain a seat. When replying NO, you need to extend your answer with “But I love people …” and add any characteristic. For example “No, but I love people with long hair”. Then everyone with long hair needs to change seats. The twist in both YES or NO answers is that every time an empty seat appears to your left, you need to go sit on it. This results in the whole circle of people jumping from one chair to the next and ends up with 1 person still in the middle. He or she needs to start this process over again.

how it works: Everybody sits in a circle, while one person goes around and taps everybodies head and says: ‘Duck’. The person keeps on doing this until he says: ‘Goose’. When that happens the person he taps, needs to get up and chase the ‘tapper’. The one who wins can go around and say the words again. The one who loses has to sit in the middle.

how it works: Group up in a team of 3 people and when the music starts, one person shows of some crazy dance moves that the other two need to copy. When a new song is played, a new person is the leader. The crazier, the better!

how it works: Everyone can join as long as you have a smartphone and a headset. The group picks a song together and everybody presses play at the same time. One person starts to dance and the other group members just copy every move. When he/she is done, you tap someone’s shoulder and the second person has to lead. This is a really good energizer if you’re in a room where you don’t want to disturb anyone else.

how it works: Everyone stands in a circle, while one person goes to another and says: “Do you love me?”. The person needs to reply ‘I love you honey, but I can’t smile’ without smiling! When he does, he’s part of the team that tries to make people smile.

how it works: The group splits in 2 and forms line of people, facing each other. You play a similar game as Rock-Paper-Scissors with the person standing in front of you. But we use the symbols of a wizard, a giant and a dwarf. The rules are that the dwarf wins from the wizard, the giant wins from dwarf, wizard wins from giant. When playing the game, act out the different symbols with your whole body. When one of you wins, the loser runs to the wall behind him as fast as he can and the winner needs to catch him before he reaches the wall.

how it works: A group of 3 people. Two people stand back to back and form an imaginary pistol with their hands. The third person starts shouting out fruits. For every fruit he shouts out, the 2 people need to take 1 step away from the other person. The list of fruits goes very fast. When a non-fruit item is shouted, the 2 people turn around and shoot the other. The one that is fastest, is the winner.

how it works: This is a very simple energizer. One person in the group starts laughing and tries to get the others to start laughing as well. The energizer is only over when everyone is genuinely laughing his or her heart out.

how it works: This works best with a very large group. Itâ&amp;#x20AC;&amp;#x2122;s very simple. Stand up and start shouting as loud as you can. Do this for a full 2 minutes. Go all out!

how it works: In groups of 3, have 1 person in the center and 2 on either side. The person to the left will be shouting general questions ie “What’s the color of the sky?” “What day of the week is it?” while the person on the right will be shouting general math questions ie “2+2” “3x3”. These will be asked repeatedly until the person in the center answers your question correctly. Do this for 1-2 minutes then switch positions.

how it works: One person starts making a sound and a movement, eg a â&amp;#x20AC;&amp;#x153;woopâ&amp;#x20AC;?-sound, flapping one arm. The next person connects to the first part in our machine, also making a sound and a movement. You keep repeating the sound/movement until everyone in the group is connected, making it a giant moving noisy machine! Works best with big groups.

how it works: Everyone gets into a penguin position: legs tight against each other, arms tight against the body and hand palms out, away from the body. One person starts by laughing with a very high pitched voice, as if a penguin would laugh. He also moves around like a penguin while doing this. The other people in the group have to copy his moves.

how it works: Good for a big group of people. Everyone stands in a circle. One person starts of by stretching his arms straight out, bending the knees a bit and shouting “Maaaa....!” and keeps shouting this. The person next to him copies this, and the next person copies this etc. Everyone keeps on shouting “Maaaaa....!’ until the circle is complete and back at the person who started. This person then raises his hands in the air and finished the shout with “aaaaZUNGA!”. This finishing of should be done with the whole group so it’s best to try a few times before you get it right.

how it works: You walk around in a room together with everyone. For every person you meet you have to say hello in a new way, for example touching elbows, jump and high five, spin around each other, etc. You cannot do the same thing twice.

how it works: You walk around in a room humming on a song. Everyone is given different songs, quite a few the same. Then you walk around and pair up with the people humming the same song as you.

how it works: Everyone stands in a circle. The first person starts making a move (like jumping up) and simultaneously saying a word that corresponds with the move (like â&amp;#x20AC;&amp;#x153;UP!â&amp;#x20AC;?). The next person copies this move and adds a new move and word.

Manual on what energizers are, and how to do them.