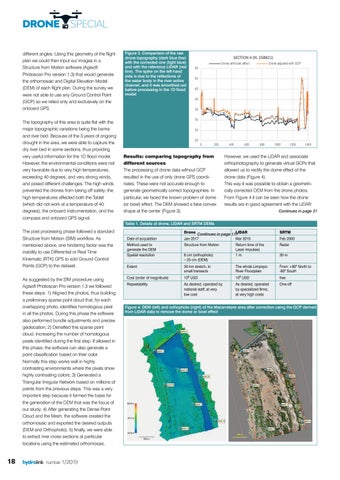 different angles. Using this geometry of the flight plan we could then input our images in a Structure from Motion software (Agisoft Photoscan Pro version 1.3) that would generate the orthomosaic and Digital Elevation Model (DEM) of each flight plan. During the survey we were not able to use any Ground Control Point (GCP) so we relied only and exclusively on the onboard GPS. The topography of this area is quite flat with the major topographic variations being the banks and river bed. Because of the 3 years of ongoing drought in the area, we were able to capture the dry river bed in some sections, thus providing very useful information for the 1D flood model. However, the environmental conditions were not very favorable due to very high temperatures, exceeding 40 degrees, and very strong winds, and posed different challenges. The high winds prevented the drones from taking off safely; the high temperatures affected both the Tablet (which did not work at a temperature of 40 degrees), the onboard instrumentation, and the compass and onboard GPS signal.

Figure 3. Comparison of the raw drone topography (dark blue line) with the corrected one (light blue) and with the reference LIDAR (red line). The spike on the left-hand side is due to the reflections of the water body in the river active channel, and it was smoothed out before processing in the 1D flood model

Results: comparing topography from different sources The processing of drone data without GCP resulted in the use of only drone GPS coordinates. These were not accurate enough to generate geometrically correct topographies. In particular, we faced the known problem of dome (or bowl) effect. The DEM showed a fake convex shape at the center (Figure 3).

However, we used the LiDAR and associate orthophotography to generate virtual GCPs that allowed us to rectify the dome effect of the drone data (Figure 4). This way it was possible to obtain a geometrically corrected DEM from the drone photos. From Figure 4 it can be seen how the drone results are in good agreement with the LiDAR Continues in page 21

The post processing phase followed a standard Structure from Motion (SfM) workflow. As mentioned above, one hindering factor was the inability to use Differential or Real Time Kinematic (RTK) GPS to add Ground Control Points (GCP) to the dataset. As suggested by the SfM procedure using Agisoft Photoscan Pro version 1.3 we followed these steps: 1) Aligned the photos, thus building a preliminary sparse point cloud that, for each overlapping photo, identifies homologous pixel in all the photos. During this phase the software also performed bundle adjustments and precise geolocation; 2) Densified this sparse point cloud, increasing the number of homologous pixels identified during the first step. If allowed in this phase, the software can also generate a point classification based on their color. Normally this step works well in highly contrasting environments where the pixels show highly contrasting colors; 3) Generated a Triangular Irregular Network based on millions of points from the previous steps. This was a very important step because it formed the basis for the generation of the DEM that was the focus of our study; 4) After generating the Dense Point Cloud and the Mesh, the software created the orthomosaic and exported the desired outputs (DEM and Orthophoto), 5) finally, we were able to extract river cross sections at particular locations using the estimated orthomosaic.

As desired, operated by national staff, at very low cost

As desired, operated by specialized firms, at very high costs

Figure 4. DEM (left) and orthophoto (right) of the Macarretane area after correction using the GCP derived from LiDAR data to remove the dome or bowl effect 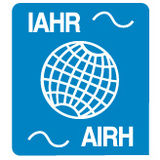