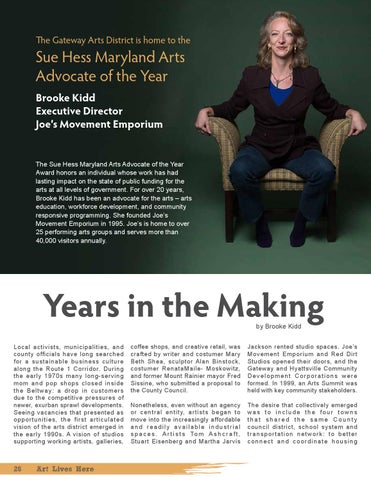 The Gateway Arts District is home to the

The Sue Hess Maryland Arts Advocate of the Year Award honors an individual whose work has had lasting impact on the state of public funding for the arts at all levels of government. For over 20 years, Brooke Kidd has been an advocate for the arts – arts education, workforce development, and community responsive programming. She founded Joe’s Movement Emporium in 1995. Joe’s is home to over 25 performing arts groups and serves more than 40,000 visitors annually.

Years in the Making by Brooke Kidd

Local activists, municipalities, and county officials have long searched for a sustainable business culture along the Route 1 Corridor. During the early 1970s many long-serving mom and pop shops closed inside the Beltway: a drop in customers due to the competitive pressures of newer, exurban sprawl developments. Seeing vacancies that presented as opportunities, the first articulated vision of the arts district emerged in the early 1990s. A vision of studios supporting working artists, galleries,

Nonetheless, even without an agency or central entity, artists began to move into the increasingly affordable and readily available industrial s p a c e s . A r t i s t s To m A s h c r a f t , Stuart Eisenberg and Martha Jarvis

The desire that collectively emerged was to include the four towns that shared the same County council district, school system and transportation network: to better connect and coordinate housing 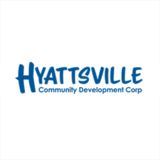