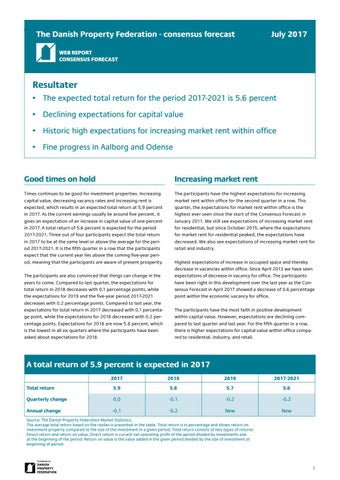 Resultater • The expected total return for the period 2017-2021 is 5.6 percent • Declining expectations for capital value • Historic high expectations for increasing market rent within office • Fine progress in Aalborg and Odense

Times continues to be good for investment properties. Increasing capital value, decreasing vacancy rates and increasing rent is expected, which results in an expected total return at 5.9 percent in 2017. As the current earnings usually lie around five percent, it gives an expectation of an increase in capital value of one percent in 2017. A total return of 5.6 percent is expected for the period 2017-2021. Three out of four participants expect the total return in 2017 to be at the same level or above the average for the period 2017-2021. It is the fifth quarter in a row that the participants expect that the current year lies above the coming five-year period, meaning that the participants are aware of present prosperity.

Highest expectations of increase in occupied space and thereby decrease in vacancies within office. Since April 2013 we have seen expectations of decrease in vacancy for office. The participants have been right in this development over the last year as the Consensus Forecast in April 2017 showed a decrease of 0.6 percentage point within the economic vacancy for office. The participants have the most faith in positive development within capital value. However, expectations are declining compared to last quarter and last year. For the fifth quarter in a row, there is higher expectations for capital value within office compared to residential, industry, and retail.

A Danish economy on the move Good times within investment properties improve the economic growth. The Danish Economic Councils expect an economic growth of 2.1 percent in 2017 increasing to 2.2 percent towards 2019. At the same time, net unemployment is expected to decrease by 1.000 – 2.000 people a year. Economic growth and activity give demand for leases of higher value, increasing occupied space, and increasing market rent. IPF’s (Investment Property Forum) latest Consensus Forecast shows that expectations for offices in Copenhagen with prime location will increase with 1.5 percent a year in average over the next three years regarding market rent.

The expected total return for the period 2017-2021 is 5.6 percent Declining expectations for capital value Historic high expectations for increasing market rent within office Fine progress in Aalborg and Odense