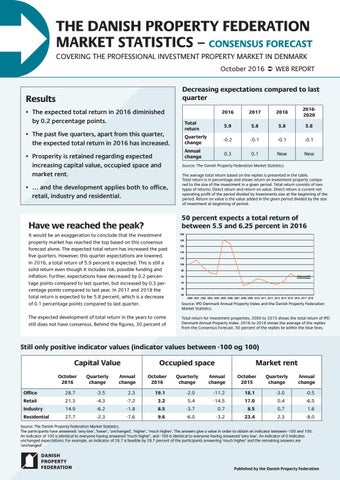 Brexit Prosperity remains regarding investment properties in Denmark. However, since the latest consensus forecast the investors have had to relate to the British farewell to the EU (Brexit). It has been pointed out that the Brexit could lead to increasing prices on investment properties in Denmark as some investors would prefer Denmark to England. Another possible effect could be higher risk and lower economic growth leading to a decrease in capital value. The lower expectations compared to last quarter could also indicate that the professional property market regards higher risk and lower expected economic growth to have the greatest impact.

No change in expectations geographically Capital value is almost unchanged compared to last quarter when considering expectations across the country. The ranking remains: Copenhagen, Aarhus, Aalborg, the Triangle Area, Odense and the rest of the country. The relocation of public jobs has not had any noticeable effect on this. Source: The Danish Property Federation Market Statistics.