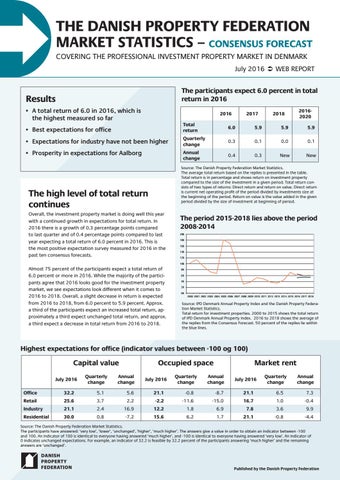 The participants expect 6.0 percent in total return in 2016

• Expectations for industry have not been higher

• Prosperity in expectations for Aalborg

The high level of total return continues Overall, the investment property market is doing well this year with a continued growth in expectations for total return. In 2016 there is a growth of 0.3 percentage points compared to last quarter and of 0.4 percentage points compared to last year expecting a total return of 6.0 percent in 2016. This is the most positive expectation survey measured for 2016 in the past ten consensus forecasts.

Growth in Copenhagen market rent for office in European top 10

Aalborg is gaining ground The ranking of areas regarding expected capital value has been unchanged for four quarters in a row: Copenhagen, Aarhus, Aalborg, the Triangle Area, Odense, and the rest of the country. The difference between Aarhus and Aalborg remains, although it has been diminished. Aarhus is decreasing a little while Aalborg increases. The difference between Aalborg and the Triangle Area has never been higher before, but we only have to look back five quarters to see that the Triangle Area was considered better in capital value than Aalborg. The rest of the country still has the lowest expectations for capital value.

Source: The Danish Property Federation Market Statistics The map shows which regions in Denmark that have the highest capital growth compared to other regions. We have asked about the Triangle Region in Jutland (Fredericia, Kolding, and Vejle), Copenhagen, Odense, Aalborg, Aarhus, and all other regions as the rest of the country. From the replies, we have created an indicator. If the area is the lightest colour, at least 70 percent of the participants have agreed that this region is doing best compared to other regions.