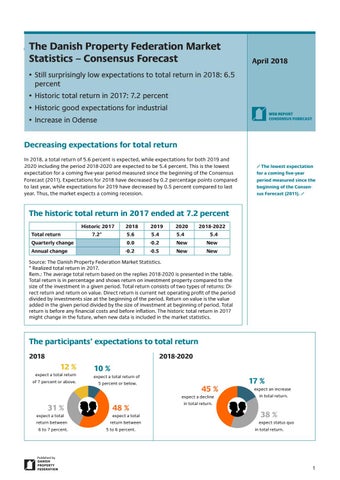 The lowest expectation for a coming five-year period measured since the beginning of the Consensus Forecast (2011).

Source: The Danish Property Federation Market Statistics. * Realized total return in 2017. Rem.: The average total return based on the replies 2018-2020 is presented in the table. Total return is in percentage and shows return on investment property compared to the size of the investment in a given period. Total return consists of two types of returns: Direct return and return on value. Direct return is current net operating profit of the period divided by investments size at the beginning of the period. Return on value is the value added in the given period divided by the size of investment at beginning of period. Total return is before any financial costs and before inflation. The historic total return in 2017 might change in the future, when new data is included in the market statistics.

The participants’ expectations to total return 2018

expect a total return of

of 7 percent or above.

expect an increase in total return.

2017 better than expected 2017 was a little better compared to the average expected last quarter. The expected total return was 5.8 percent, but total return ended at 7.2 percent. Thylander Group and Sadolin & Albæk hit 2017 Two participantsclose to the final total return of 7.2 percent in 2017, were Lars Thylander from Thylander Group and Christian Fladeland from Sadolin & Albæk. Please find a short interview on their considerations regarding 2017 and their first expectations to 2018 on page 4 in this web report.

Industry has had a historic good consensus forecast in 2017.

Industry beats records As expected in this forecast, capital value on industry properties started to increase in 2017, and are expected to keep increasing. Industry has had a historic good consensus forecast, where indicator values for economic vacancy and market rent have not been measured higher before. Industry still gives a good direct return of above six percent and this might contribute to the fact that the demand for owning industry properties increases at the same time as there is an increased production in the Danish economy ensuring an ongoing profit. Expectations to capital value decreased in all four sectors while we see increased expectations to market rent. Office and industry have the highest economic vacancy, but this is expected to decrease. Retail has the lowest expectation to capital value, and retail also has the lowest value added among the four sectors in 2017.

Source: The Danish Property Federation Market Statistics. Rem.: The participants have answered: ‘very low’, ‘lower’, ‘unchanged’, ‘higher’, ‘much higher’ to the question: ’What are your expectations to the development within [secrot]properties with prime location a year from today?’. The answers give a value to obtain an indicator between -100 and 100. An indicator of 100 is identical to everyone having answered ‘much higher’, and -100 is identical to everyone having answered ‘very low’. An indicator of 0 indicates unchanged expectations. For example, an indicator of 31.0 is feasible by 31.0 percent of the participants answering, ‘much higher’ and the remaining answers are ‘unchanged’.

Source: The Danish Property Federation Market Statistics. Rem.: Total return for investment properties. From 2011 to 2017 total return from the Danish Property Federation Market Statistic is shown, while 2000 to 2010 shows own calculations based on data from IPD Denmark Annual Property Index. 2018 to 2020 shows the average of the replies from the Consensus Forecast. 50 percent of the replies lie within the blue lines.

Odense beats the record Since 2014, where Odense was first included in this forecast, Odense has not obtained a better result than now. This means that Odense cements their fourth place after Copenhagen, Aarhus, and Aalborg, while the Triangle Area and the rest of Denmark follows. Even though capital value in the major cities has increased and the investors are looking for investment properties outside the major cities, it does not change the fact that capital value increase is expected in the larger cities. Compared to last quarter, we see an increase in indicator values for Odense, Aarhus, and Copenhagen, while we see a decrease in the Triangle Area, Aalborg and the rest of the country.

Interview with Lars Thylander, Thylander Group How did you succeed with such precise expectations for 2017? ”I have been in the market for 35 years and thereby I have a great experience in reading the market. It is this experience I draw on in Thylander Group, when we invest. When it comes to expectations, it is all about reading the relationship between prices of investment properties and other assets – including the temperature of the market for both professional and residential leases and of course the actual situation within the economy – both in Denmark and internationally.” You expect seven percent in total return for 2018 – why? ”I believe that the optimism for the economy will continue in 2018 at the same time as we will continue to have a low interest level. For the market in general it will probably give a total return of around 7 percent. However, I believe that there will be players in the market with a somewhat lower return as they have bought property at a too high price in the current market.” What does the key figure ”total return” mean to you as an investor? ”Total return is of course a central factor for a property investor. However, it is important to emphasize that in particular property investments are long-term and partly illiquid investments where you have to take care not to be influenced by returns of a single year, and then you have to focus on the risk adjusted return of the property sector in question.”

Interview with Christian Fladeland, Sadolin & Albæk How did you succeed with such precise expectations for 2017? ”2017 was a stable year for price development. Despite continuous decrease in yield within certain segments and locations in 2017, it was more moderate than in 2015-2016, where decreasing yield was a considerable force behind the price increases. Expecting price increases driven by 1) modest decrease in yield and only in certain segments, and 2) moderately increasing rent levels, I felt relatively comfortable by the price development being modest around 1-2% for total Denmark (larger regional differences). Based on an expectation of a continuous return for total Denmark of 5-6%, my expectation for total return was around 7%. ” You expect six percent in total return for 2018 – why? ”I believe that we will see a flat price development in 2018, around 0–1% for Denmark as such. Yield will stabilize and looking at total Denmark I believe in only moderate increasing rent levels in certain segments and stable rent levels in most segments. Adding this price development to my expectations of a stable current return in 2018, we will end on a total return of around 6% in 2018.” What does the key figure ”total return” mean to you as market player? ”Total return to me is a primary target for the dynamics of the property market in a given year, and I use it to review how it differs from my own evaluation of the long-term trend and how these deviations create opportunities/challenges for my clients. The current return has shown to be extremely robust across investment cycles and will only very seldom (and often only short term) break out of a span of 200 bps (5-7%), but in the periods where adjustment in yields within this span there might be rather severe price adjustments. With an expectation of a long-term price increase of 1-2% (the upper end of the span including larger cities and the lower end including more remote locations), I focus on total return, which in a given year vary from my normal span of 6-7%, and what the driving force behind these variations is. Is it interest driven? Is it due to change of relative pricing compared to other active classes? Is it caused by a strong/weak consumer market with increasing/decreasing rental and vacancy levels as a result? Has the risc premium on investment properties changed? The understanding of this is essential to our strategic counselling.”

About the forecast This web report was published in the end of March 2018. The next sceduled publication is in the end of June 2018. The objective is to create a more transparent property market. The Consensus Forecast is published on a quarterly basis and is very dependent on the participating companies’ good will to report data every quarter. Without these companies, the Consensus Forecast would never have been possible. 42 market players participated in this forecast. 45 percent of the participants are property owners. Furthermore, 21 percent are commercial brokers, 7 percent are banks/ mortgage providers, and 26 percent are other players.