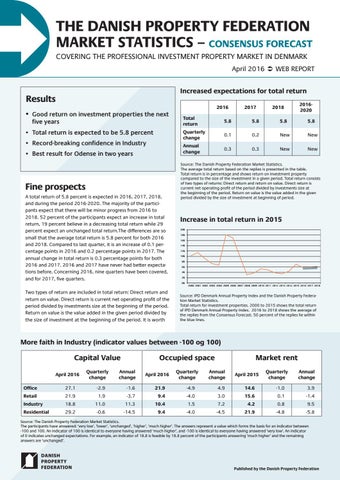 Results • Good return on investment properties the next five years

• Total return is expected to be 5.8 percent • Record-breaking confidence in Industry • Best result for Odense in two years

noticing that the total return is before any financial expenses such as interest expenses and before inflation. This means that a total return of 5.8 percent must cover possible financial expenses and inflation. As you take a risk by investing in property compared to e.g. Danish bonds, the remaining return can be seen as a payment for working with property instead of investing in Danish bonds.

which Odense has been included, but it is not enough to change the fifth place position. 52 percent of the participants have replied that Odense is better than fifth place, but there is still a gap up to number three and four; the Triangle Area and Aalborg. In sixth and last place we find the rest of the country, defined as the areas outside the centres.

Odense moves up In the present calendar year, capital value growth ismeasured in the following areas: Aalborg, Aarhus, Copenhagen, Odense, the triangle area and the rest of the country. The expectations are unchanged in the economic centres, meaning that there is a greater trust to the marked of Copenhagen, followed by Aarhus. The race is tight between the Triangle Area in third place and Aalborg in fourth place, while Odense obtains fifth place in this forecast. This is the best result over the eight forecasts in

- Good return on investment properties the next five years - Total return is expected to be 5.8 percent - Record-breaking confidence in industry - Best result for Odense in two years