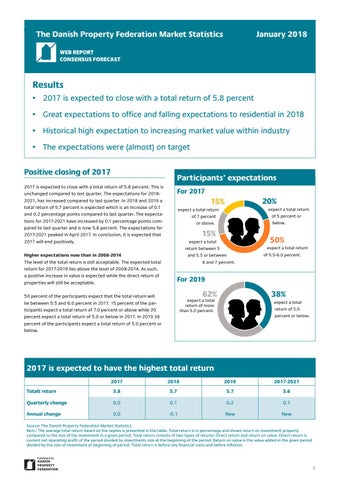 Results • 2017 is expected to close with a total return of 5.8 percent • Great expectations to office and falling expectations to residential in 2018 • Historical high expectation to increasing market value within industry • The expectations were (almost) on target Positive closing of 2017

Higher expectations now than in 2008-2014 The level of the total return is still acceptable. The expected total return for 2017-2019 lies above the level of 2008-2014. As such, a positive increase in value is expected while the direct return of properties will still be acceptable.

and 5.5 or between 5 eller derunder

expect a total return of more than 5.0 percent.

expect a total return of 5.0 percent or below.

Source: The Danish Property Federation Market Statistics. Rem.: The average total return based on the replies is presented in the table. Total return is in percentage and shows return on investment property compared to the size of the investment in a given period. Total return consists of two types of returns: Direct return and return on value. Direct return is current net operating profit of the period divided by investments size at the beginning of the period. Return on value is the value added in the given period divided by the size of investment at beginning of period. Total return is before any financial costs and before inflation. Published by

Copenhagen is still in front The highest expectations for positive development in capital value is in Copenhagen compared to all other areas in Denmark. 83 percent of the participants in this forecast choose Copenhagen to be the region in which the capital values will develop most positively. The ranking after Copenhagen is: Aarhus, Aalborg, Odense, and the Triangle Area followed by the rest of the country.

Source: The Danish Property Federation Market Statistics. Rem.: The map shows which regions in Denmark that have the highest capital growth compared to other regions. We have asked about the Triangle Region in Jutland (Fredericia, Kolding, and Vejle), Copenhagen, Odense, Aalborg, Aarhus, and all other regions as the rest of the country. From the replies, we have created an indicator. If the area is the lightest colour, at least 70 percent of the participants have agreed that this region is doing best compared to other regions. Published by

About the forecast These are the expectations for January 2018 from the Danish Property Federation Consensus Forecast. The objective is to create a more transparent property market. The Consensus Forecast is published on a quarterly basis and is very dependent on the participating companies’ good will to report data every quarter. Without these companies, the Consensus Forecast would never have been possible.

40 market players participated in this forecast. 43 percent of the participants are property owners. Furthermore, 25 percent are commercial brokers, 8 percent are banks/mortgage providers, and 25 percent are other players.