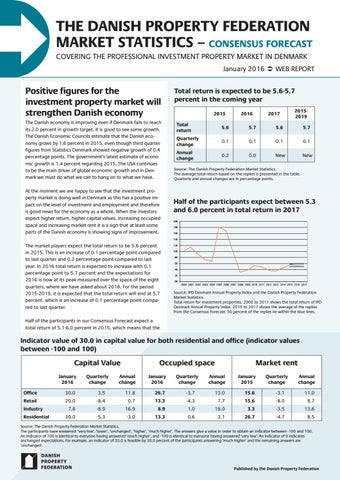 Positive figures for the investment property market will strengthen Danish economy The Danish economy is improving even if Denmark fails to reach its 2.0 percent in growth target, it is good to see some growth. The Danish Economic Councils estimate that the Danish economy grows by 1.6 percent in 2015, even though third quarter figures from Statistics Denmark showed negative growth of 0.4 percentage points. The government’s latest estimate of economic growth is 1.4 percent regarding 2015. The USA continues to be the main driver of global economic growth and in Denmark we must do what we can to hang on to what we have. At the moment we are happy to see that the investment property market is doing well in Denmark as this has a positive impact on the level of investment and employment and therefore is good news for the economy as a whole. When the investors expect higher return, higher capital values, increasing occupied space and increasing market rent it is a sign that at least some parts of the Danish economy is showing signs of improvement.

Source: The Danish Property Federation Market Statistics. The average total return based on the replies is presented in the table. Quarterly and annual changes are in percentage points.

Half of the participants in our Consensus Forecast expect a total return of 5.1-6.0 percent in 2015, which means that the

Indicator value of 30.0 in capital value for both residential and office (indicator values between -100 and 100)

major part of the participants expect normal direct return and slightly increasing value added at an overall level. It is noticeable that there can be large differences in sectors and geography. As a whole, the investment property market in Denmark is doing fine.