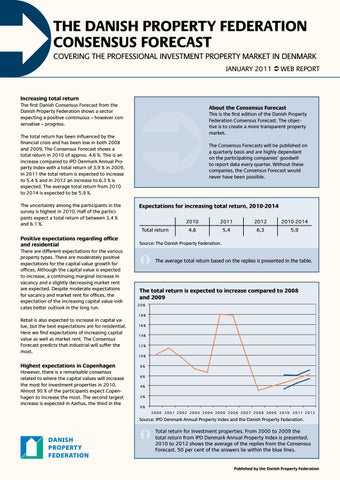 Positive expectations regarding office and residential

Retail is also expected to increase in capital value, but the best expectations are for residential. Here we find expectations of increasing capital value as well as market rent. The Consensus Forecast predicts that industrial will suffer the most.

However, there is a remarkable consensus related to where the capital values will increase the most for investment properties in 2010. Almost 90 % of the participants expect Copenhagen to increase the most. The second largest increase is expected in Aarhus, the third in the

Total return for investment properties. From 2000 to 2009 the total return from IPD Denmark Annual Property Index is presented. 2010 to 2012 shows the average of the replies from the Consensus Forecast. 50 per cent of the answers lie within the blue lines.

Triangle Region in Jutland (Frederica, Kolding, and Vejle), whereas a slower growth is expected in the rest of Denmark.

The socio-economic perspective The economic prospects for the coming years are weak, but overall positive growth is forecasted. In 2012, employment is expected to increase, while a negative public balance still is expected. In 2011 private incomes are expected to rise less than the inflation.

After a contraction in growth during 2008 and 2009, the economy is on track again. This also goes for the expectations for investment properties.

Expectation of highest capital value growth in Copenhagen 47 market players participated in this survey. 55 % of the participants are property owners, 11 % are banks/mortgage providers, 17 % are commercial agents, and 17 % are other players.

The map shows which regions in Denmark have the highest capital value growth compared to other regions. We have asked about Copenhagen, Aarhus, the Triangle Region in Jutland (Frederica, Kolding, and Vejle), and all other regions as one region. From the replies, we have created an indicator from -100 to 100. If a region gets indicator -100, all participants have agreed that this region will have the worst development in capital value compared to other regions. Published by the Danish Property Federation