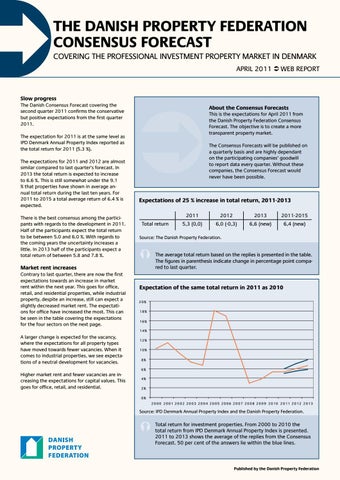 Slow progress The Danish Consensus Forecast covering the second quarter 2011 confirms the conservative but positive expectations from the first quarter 2011.

A larger change is expected for the vacancy, where the expectations for all property types have moved towards fewer vacancies. When it comes to industrial properties, we see expectations of a neutral development for vacancies.

Higher market rent and fewer vacancies are increasing the expectations for capital values. This goes for office, retail, and residential.

There is a relationship between the regional ranking with regards to the expected capital values and the last ten years regional increase. Copenhagen has an average annual GDP increase of 1.6 % in fixed prices. In comparison Eastern Jutland has 1.3 %, but both areas are above the national average for the last ten years, which is 0.9 %. Southern Jutland has experienced the second lowest annual growth of 0.6%, while Bornholm has had a difficult decade with a growth of -0.5 %.

The participants have answered: ‘very low’, ‘lower’, ‘unchanged’, ‘higher’, ‘much higher’. The answers are given a value in order to obtain an indicator between -100 and 100. An indicator of 100 means that everybody has answered ‘much higher’, and -100 shows that everybody has answered ‘very low’. An indicator of 0 indicates unchanged expectations. For example an indicator of 20.7 per cent is achieved by 20.7 per cent of the participants answering ‘much higher’ with the remaining answers ‘unchanged’. The figures in parenthesis indicate change in indication point compared to last quarter.

Still expectation of capital value growth in Copenhagen 41 market players participated in this survey. 49 % of the participants are property owners, 20 % are banks/mortgage providers, 17 % are commercial agents, and 14 % are other players.

The map shows which regions in Denmark have the highest capital value growth compared to other regions. We have asked about Copenhagen, Aarhus, the Triangle Region in Jutland (Frederica, Kolding, and Vejle), and all other regions as one region. From the replies, we have created an indicator. If an area is light green, at least 70 % of the participants have agreed that this region are doing best compared to other regions. Published by the Danish Property Federation