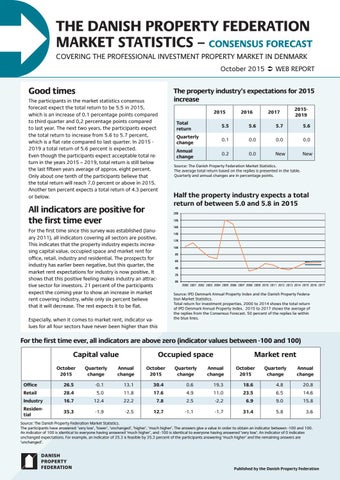 All indicators are positive for the first time ever

The property industry’s expectations for 2015 increase 2015

Source: The Danish Property Federation Market Statistics. The average total return based on the replies is presented in the table. Quarterly and annual changes are in percentage points.

For the first time since this survey was established (January 2011), all indicators covering all sectors are positive. This indicates that the property industry expects increasing capital value, occupied space and market rent for office, retail, industry and residential. The prospects for industry has earlier been negative, but this quarter, the market rent expectations for industry is now positive. It shows that this positive feeling makes industry an attractive sector for investors. 21 percent of the participants expect the coming year to show an increase in market rent covering industry, while only six percent believe that it will decrease. The rest expects it to be flat.

Especially, when it comes to market rent, indicator values for all four sectors have never been higher than this

For the first time ever, all indicators are above zero (indicator values between -100 and 100)

quarter. 43 percent of the answers from the participants expect increasing market rent for all four sectors, while only three percent of the answers from theparticipants expect a decrease in market rent. This indicates that the demand for space is increasing, which has a positive influence on the property industry. The best expectations are for capital value and market rent in the residential sector, while the occupied space percentage increases the most for the office sector.