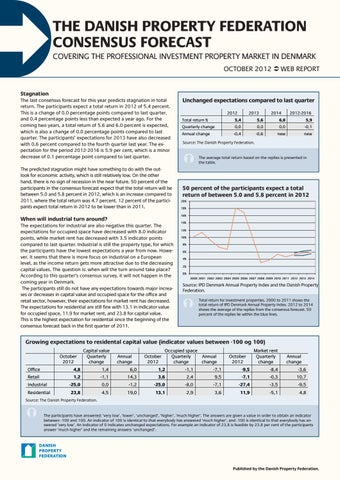 The predicted stagnation might have something to do with the outlook for economic activity, which is still relatively low. On the other hand, there is no sign of recession in the near future. 50 percent of the participants in the consensus forecast expect that the total return will be between 5.0 and 5.8 percent in 2012, which is an increase compared to 2011, where the total return was 4.7 percent. 12 percent of the participants expect total return in 2012 to be lower than in 2011.

When will industrial turn around?

Highest expectations for capital value in the regional centres

There is no faith in capital value outside the major cities, which have been the strongest regional centres in the last couple of years. This is the conclusion of this quarter’s forecast. In the property business they fully agree that the capital value growth will be higher in the regional centres than in the rest of the country. Copenhagen is still the strongest centre, while Aarhus and the triangle region also show some growth this quarter. Since the beginning of the consensus forecast in the first quarter of 2011, capital value growth will be relatively higher in Copenhagen, then Aarhus, and the triangle region. In this quarter’s consensus survey the rest of the country gets the lowest score since the beginning of the survey.

The Danish Economic Councils expect increasing but low growth in the coming years. They estimate that the growth in GNP for 2011 will be 1.0 percent. In 2012 the growth is expected to increase to 1.3 percent, in 2013 GNP is expected to be 1.2 percent, while the growth is expected to increase to 1.5 percent in 2014. The relatively low economic expectations for growth, means that it will probably take some time before property will give a total return of 8.4 percent, the average return over the last 10 years. Right now it is construction that suffers the most. Construction activity is at a historical low, which means that there might be a demand for the unoccupied space.

Source: The Danish Property Federation The map shows which regions in Denmark that have the highest value growth compared to other regions. We have asked about Copenhagen, Aarhus, the Triangle Region in Jutland (Fredericia, Kolding, and Vejle), and all other regions as one region. From the replies, we have created an indicator. If the area is light green, at least 70 percent of the participants have agreed that this region is doing best compared to other regions.