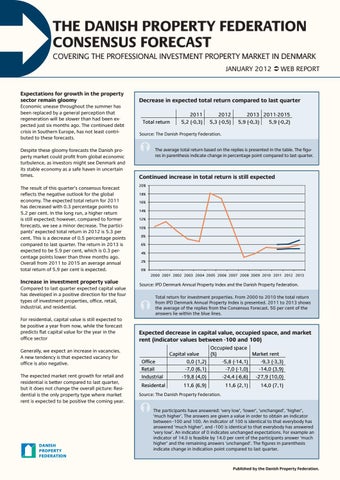 Expectations for growth in the property sector remain gloomy

Economic unease throughout the summer has been replaced by a general perception that regeneration will be slower than had been expected just six months ago. The continued debt crisis in Southern Europe, has not least contributed to these forecasts.

Despite these gloomy forecasts the Danish property market could profit from global economic turbulence, as investors might see Denmark and its stable economy as a safe haven in uncertain times.

Compared to last quarter expected capital value has developed in a positive direction for the four types of investment properties, office, retail, industrial, and residential. For residential, capital value is still expected to be positive a year from now, while the forecast predicts flat capital value for the year in the office sector

Generally, we expect an increase in vacancies. A new tendency is that expected vacancy for office is also negative.

The expected market rent growth for retail and residential is better compared to last quarter, but it does not change the overall picture: Residential is the only property type where market rent is expected to be positive the coming year.

The participants have answered: ‘very low’, ‘lower’, ‘unchanged’, ‘higher’, ‘much higher’. The answers are given a value in order to obtain an indicator between -100 and 100. An indicator of 100 is identical to that everybody has answered ‘much higher’, and -100 is identical to that everybody has answered ‘very low’. An indicator of 0 indicates unchanged expectations. For example an indicator of 14.0 is feasible by 14.0 per cent of the participants answer ‘much higher’ and the remaining answers ‘unchanged’. The figures in parenthesis indicate change in indication point compared to last quarter.

Capital value growth is expected to be most significant in Copenhagen

Consensus that capital value growth is stronger in Copenhagen

As in former consensus forecasts, the results point to capital value growth being the highest in Copenhagen of all the regions. At the same time there is not much encouragement for property outside the three central areas. 95 per cent of the participants expect capital value growth to be smaller in the rest of the country compared to Copenhagen, Aarhus, and the triangle region in Jutland (Fredericia, Kolding, and Vejle). The regional indicator value for Copenhagen, the triangle region in Jutland, and the rest of the country has marginally decreased compared to last quarter. Aarhus is the city where the growth in confidence has been the highest. However, there is still some way to go to reach the same level as for Copenhagen.

The economic advisers have also lowered their expectations

In November, the bi-annual economic adviser report from Danish Economic Council was published. In the spring report from May, an increase of 2.0 per cent in GNP was expected in both 2012 and 2013. In November it was downgraded with 0.9 and 0.7 percentage points. Over the last two quarters the consensus forecast results for 2012 and 2013 has decreased by 1.0 percentage points from 6.3 in 2012, and 0.8 percentage points from 6.7 per cent for 2013. The expected total return and growth in GNP is moving in the same direction.

The map shows which regions in Denmark that have the highest capital value growth compared to other regions. We have asked about Copenhagen, Aarhus, the Triangle Region in Jutland (Frederica, Kolding, and Vejle), and all other regions as one region. From the replies, we have created an indicator. If an area is light green, at least 70 per cent of the participants have agreed that this region is doing best compared to other regions.

Expectations for growth in the property sector remain gloomy