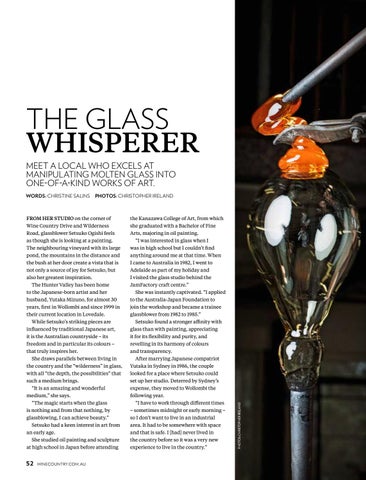 THE GLASS WHISPERER MEET A LOCAL WHO EXCELS AT MANIPULATING MOLTEN GLASS INTO ONE-OF-A-KIND WORKS OF ART. PHOTOS: CHRISTOPHER IRELAND

FROM HER STUDIO on the corner of Wine Country Drive and Wilderness Road, glassblower Setsuko Ogishi feels as though she is looking at a painting. The neighbouring vineyard with its large pond, the mountains in the distance and the bush at her door create a vista that is not only a source of joy for Setsuko, but also her greatest inspiration. The Hunter Valley has been home to the Japanese-born artist and her husband, Yutaka Mizuno, for almost 30 years, first in Wollombi and since 1999 in their current location in Lovedale. While Setsuko’s striking pieces are influenced by traditional Japanese art, it is the Australian countryside – its freedom and in particular its colours – that truly inspires her. She draws parallels between living in the country and the “wilderness” in glass, with all “the depth, the possibilities” that such a medium brings. “It is an amazing and wonderful medium,” she says. “The magic starts when the glass is nothing and from that nothing, by glassblowing, I can achieve beauty.” Setsuko had a keen interest in art from an early age. She studied oil painting and sculpture at high school in Japan before attending

the Kanazawa College of Art, from which she graduated with a Bachelor of Fine Arts, majoring in oil painting. “I was interested in glass when I was in high school but I couldn’t find anything around me at that time. When I came to Australia in 1982, I went to Adelaide as part of my holiday and I visited the glass studio behind the JamFactory craft centre.” She was instantly captivated. “I applied to the Australia-Japan Foundation to join the workshop and became a trainee glassblower from 1982 to 1985.” Setsuko found a stronger affinity with glass than with painting, appreciating it for its flexibility and purity, and revelling in its harmony of colours and transparency. After marrying Japanese compatriot Yutaka in Sydney in 1986, the couple looked for a place where Setsuko could set up her studio. Deterred by Sydney’s expense, they moved to Wollombi the following year. “I have to work through different times – sometimes midnight or early morning – so I don’t want to live in an industrial area. It had to be somewhere with space and that is safe. I [had] never lived in the country before so it was a very new experience to live in the country.” 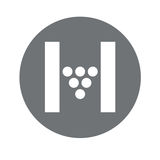