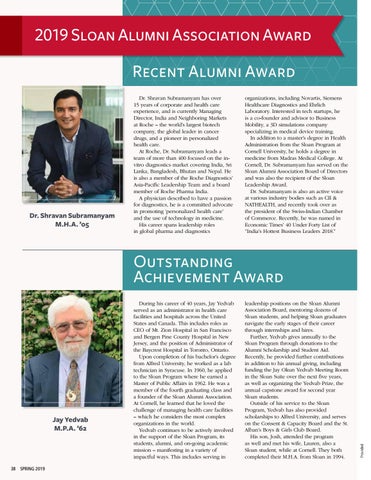 Dr. Shravan Subramanyam has over 15 years of corporate and health care experience, and is currently Managing Director, India and Neighboring Markets at Roche – the world’s largest biotech company, the global leader in cancer drugs, and a pioneer in personalized health care. At Roche, Dr. Subramanyam leads a team of more than 400 focused on the invitro diagnostics market covering India, Sri Lanka, Bangladesh, Bhutan and Nepal. He is also a member of the Roche Diagnostics’ Asia-Pacific Leadership Team and a board member of Roche Pharma India. A physician described to have a passion for diagnostics, he is a committed advocate in promoting ‘personalized health care’ and the use of technology in medicine. His career spans leadership roles in global pharma and diagnostics

organizations, including Novartis, Siemens Healthcare Diagnostics and Ehrlich Laboratory. Interested in tech startups, he is a co-founder and advisor to Business Mobility, a 3D simulations company specializing in medical device training. In addition to a master’s degree in Health Administration from the Sloan Program at Cornell University, he holds a degree in medicine from Madras Medical College. At Cornell, Dr. Subramanyam has served on the Sloan Alumni Association Board of Directors and was also the recipient of the Sloan Leadership Award. Dr. Subramanyam is also an active voice at various industry bodies such as CII & NATHEALTH, and recently took over as the president of the Swiss-Indian Chamber of Commerce. Recently, he was named in Economic Times’ 40 Under Forty List of “India’s Hottest Business Leaders 2018.”

During his career of 40 years, Jay Yedvab served as an administrator in health care facilities and hospitals across the United States and Canada. This includes roles as CEO of Mt. Zion Hospital in San Francisco and Bergen Pine County Hospital in New Jersey, and the position of Administrator of the Baycrest Hospital in Toronto, Ontario. Upon completion of his bachelor’s degree from Alfred University, he worked as a lab technician in Syracuse. In 1960, he applied to the Sloan Program where he earned a Master of Public Affairs in 1962. He was a member of the fourth graduating class and a founder of the Sloan Alumni Association. At Cornell, he learned that he loved the challenge of managing health care facilities – which he considers the most complex organizations in the world. Yedvab continues to be actively involved in the support of the Sloan Program, its students, alumni, and on-going academic mission – manifesting in a variety of impactful ways. This includes serving in

leadership positions on the Sloan Alumni Association Board, mentoring dozens of Sloan students, and helping Sloan graduates navigate the early stages of their career through internships and hires. Further, Yedvab gives annually to the Sloan Program through donations to the Alumni Scholarship and Student Aid. Recently, he provided further contributions in addition to his annual giving, including funding the Jay Okun Yedvab Meeting Room in the Sloan Suite over the next five years, as well as organizing the Yedvab Prize, the annual capstone award for second year Sloan students. Outside of his service to the Sloan Program, Yedvab has also provided scholarships to Alfred University, and serves on the Consent & Capacity Board and the St. Alban’s Boys & Girls Club Board. His son, Josh, attended the program as well and met his wife, Lauren, also a Sloan student, while at Cornell. They both completed their M.H.A. from Sloan in 1994. 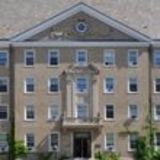 HUMECATHON: Vol. 47 No. 1, Spring 2019. Within this issue of Human Ecology Magazine you will read about the amazing work of our faculty, stu...

HUMECATHON: Vol. 47 No. 1, Spring 2019. Within this issue of Human Ecology Magazine you will read about the amazing work of our faculty, stu...