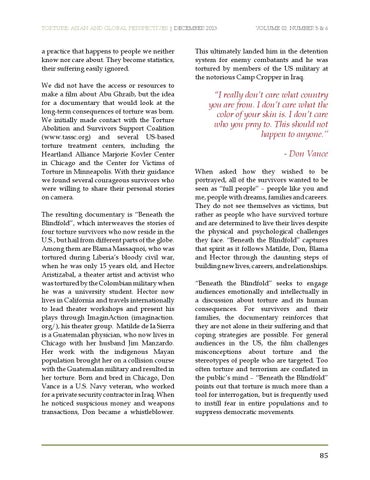 a practice that happens to people we neither know nor care about. They become statistics, their suffering easily ignored. We did not have the access or resources to make a film about Abu Ghraib, but the idea for a documentary that would look at the long-term consequences of torture was born. We initially made contact with the Torture Abolition and Survivors Support Coalition (www.tassc.org) and several US-based torture treatment centers, including the Heartland Alliance Marjorie Kovler Center in Chicago and the Center for Victims of Torture in Minneapolis. With their guidance we found several courageous survivors who were willing to share their personal stories on camera. The resulting documentary is “Beneath the Blindfold”, which interweaves the stories of four torture survivors who now reside in the U.S., but hail from different parts of the globe. Among them are Blama Massaquoi, who was tortured during Liberia’s bloody civil war, when he was only 15 years old, and Hector Aristizabal, a theater artist and activist who was tortured by the Colombian military when he was a university student. Hector now lives in California and travels internationally to lead theater workshops and present his plays through ImaginAction (imaginaction. org/), his theater group. Matilde de la Sierra is a Guatemalan physician, who now lives in Chicago with her husband Jim Manzardo. Her work with the indigenous Mayan population brought her on a collision course with the Guatemalan military and resulted in her torture. Born and bred in Chicago, Don Vance is a U.S. Navy veteran, who worked for a private security contractor in Iraq. When he noticed suspicious money and weapons transactions, Don became a whistleblower.

This ultimately landed him in the detention system for enemy combatants and he was tortured by members of the US military at the notorious Camp Cropper in Iraq.

“I really don’t care what country you are from. I don’t care what the color of your skin is. I don’t care who you pray to. This should not happen to anyone.” - Don Vance When asked how they wished to be portrayed, all of the survivors wanted to be seen as “full people” – people like you and me, people with dreams, families and careers. They do not see themselves as victims, but rather as people who have survived torture and are determined to live their lives despite the physical and psychological challenges they face. “Beneath the Blindfold” captures that spirit as it follows Matilde, Don, Blama and Hector through the daunting steps of building new lives, careers, and relationships. “Beneath the Blindfold” seeks to engage audiences emotionally and intellectually in a discussion about torture and its human consequences. For survivors and their families, the documentary reinforces that they are not alone in their suffering and that coping strategies are possible. For general audiences in the US, the film challenges misconceptions about torture and the stereotypes of people who are targeted. Too often torture and terrorism are conflated in the public’s mind – “Beneath the Blindfold” points out that torture is much more than a tool for interrogation, but is frequently used to instill fear in entire populations and to suppress democratic movements.

The long march has clocked a hundred days. The brave marchers have walked continuously from the place of their birth to the places where they have hoped to effect change. They have been searching for their loved ones, who were picked up, by security forces in uniform and armed intelligence agents in civilian clothes. ‘Responsible’ guardians, deployed in the area to control the ‘resistance’ have shown themselves to be devils in disguise. More detail at http://www.humanrights.asia/resources/journals-magazines/torturemag/TortureV02N05and06/ 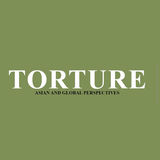