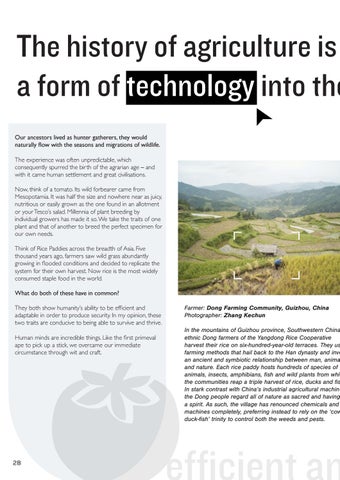 The history of agriculture is a form of technology into the Our ancestors lived as hunter gatherers, they would naturally flow with the seasons and migrations of wildlife. The experience was often unpredictable, which consequently spurred the birth of the agrarian age – and with it came human settlement and great civilisations. Now, think of a tomato. Its wild forbearer came from Mesopotamia. It was half the size and nowhere near as juicy, nutritious or easily grown as the one found in an allotment or your Tesco’s salad. Millennia of plant breeding by individual growers has made it so. We take the traits of one plant and that of another to breed the perfect specimen for our own needs. Think of Rice Paddies across the breadth of Asia. Five thousand years ago, farmers saw wild grass abundantly growing in flooded conditions and decided to replicate the system for their own harvest. Now rice is the most widely consumed staple food in the world. What do both of these have in common? They both show humanity’s ability to be efficient and adaptable in order to produce security. In my opinion, these two traits are conducive to being able to survive and thrive. Human minds are incredible things. Like the first primeval ape to pick up a stick, we overcame our immediate circumstance through wit and craft.

In the mountains of Guizhou province, Southwestern China ethnic Dong farmers of the Yangdong Rice Cooperative harvest their rice on six-hundred-year-old terraces. They us farming methods that hail back to the Han dynasty and invo an ancient and symbiotic relationship between man, anima and nature. Each rice paddy hosts hundreds of species of animals, insects, amphibians, fish and wild plants from whi the communities reap a triple harvest of rice, ducks and fis In stark contrast with China’s industrial agricultural machine the Dong people regard all of nature as sacred and having a spirit. As such, the village has renounced chemicals and machines completely, preferring instead to rely on the ‘cow duck-fish’ trinity to control both the weeds and pests.

Is our focus on artificial intelligence good for humanity? Is it making us lazy and demeaning human creativity? Will AI ever replace the human? And does data really drive everything it claims? Human Magazine is published by full-service creative agency Kemosabe. 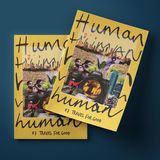