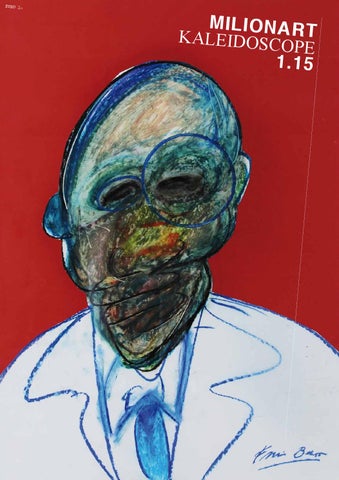 „Lucy in the sky sky with diamonds“

Francis Bacon: History and evidences of the drawings donated by Francis Bacon to Cristiano Lovatelli Ravarino

„LUCY IN THE SKY WITH DIAMONDS“

IS A SONG BY THE BEATLES, WRITTEN BY JOHN LENNON, WHO SING ABOUT A “GIRL WITH KALEIDOSCOPE EYES“.

The kaleidoscope has fascinated people for centuries: glass elements are shown in continually changing symmetrical forms by reflection in two or more mirrors set at angles to each other it’s visual magic! MilionArt wants to fascinate, too, by combining many individual aspects that inspire, diversify and characterize beyond predetermined patterns. MilionArt goes „kaleidoscopic“ new ways: we present art in an innovative way; making art accessible without categorizing and therefore offering enough space for new perspectives. John Lennon describes an image of „the girl with kaleidoscope eyes“ who will come from heaven to save him. Our KALEIDOSCOPE opens colourful and new perspectives to all of you. Enjoy this voyage of discovery!

HISTORY AND EVIDENCES OF THE DRAWINGS DONATED BY FRANCIS BACON TO CRISTIANO LOVATELLI RAVARINO By Umberto Guerini Cristiano Lovatelli Ravarino owns a series of artworks in large format, drawings, pastels and collages that was given to him by Francis Bacon, as is demonstrated by a deed of gift, dated and signed by the Irish painter. This deed of gift reads: “02/04/1988. I left all my drawings to Cristiano Ravarino. I am indebted to him and Italian renaissance culture. I also have the suspicion that in all those years Marlborough Gallery cheated and robbed me thanks to awkward situations created by the Gallery itself. With love, Francis Bacon.” Dr. Ambra Draghetti – expert in graphology at Bologna’s Court – tried that the day and signature found on the deed of gift were both written by Francis Bacon. In addition to the aforementioned deed of gift, the authenticity of the drawings is further confirmed by the following evidence:

• the sentence handed down by Bologna’s Court on July 8, 2004 and the evidences collected during the trial, in particular the testimonies of Giorgio Gaggioli, Gloria Zanella, Elisa Menardi and Prof. Vincenzo Lucchese.

• Testimony from Cristina Pezzoli, known as “Bebella,” who declared that she was given a drawing as a gift directly by Francis Bacon in 1982/83, while the two were at the Osteria dei Poeti, a restaurant in Via dei Poeti, Bologna, one evening. • New expert analysis of the signature and graphological signs conducted by Dr. Ambra Draghetti. • Testimony from the Marquise Horacio de Sosa Cordero, who was such a close friend of Francis Bacon’s that he was asked by John Edwards to go to Madrid in April 1992 in order to identify the artist’s body. During a press conference held in Buenos Aires on October 22, 2010, the Marquise de Sosa Cordero confirmed that the drawings exhibited and the signatures found on the drawings are both Francis Bacon’s. He also recognized and identified many of the people portrayed in the drawings. In an essay written for a convention that focused on Francis Bacon’s drawings, held on June 26, 2012 at the Gate Gallery in Prague as part of the exhibition “Francis Bacon–Bhoumil Harabal,” Horacio de Sosa Cordero declared as follows: “Very few people frequented his studio in London on a daily basis: Peter Beard, whenever he came back from one of his photographic

safaris in Africa; David Sylvester; Lucian Freud; George Dyer; and I; years later John Edwards, who sometimes arrived from Italy accompanied by a young, very friendly Bologna journalist named Ravarino. Francis Bacon toured Italy together with Ravarino, visiting Rome, Sicily, Cortina d’Ampezzo, Bologna, Tuscany and other Italian cities… The truth is that Francis Bacon began to make periodic trips to Italy, where things were quiet and he was away from the watchful eyes of Gilbert Lloyd, or the sister Angela or Pierre Levin, his right-hand man in NYC, today director of the gallery. Then he would eagerly dedicate himself to drawing, as well as producing collages and mixed media, some of which can be seen on display at the Gate Gallery in Prague, and many of which represent his magnificent series of Popes, in addition to studio portraits, or compositions, some of which I saw in his atelier in Paris. Francis Bacon was involved in his relationship with Ravarino, his ‘man in Italy,’ a companion, lover and the inheritor of these magnificent works that I would call “the major works from Francis Bacon’s secret period in Italy.” • Testimony from Stephen Conrad, an english art historian who in an email sent to me on June 11, 2012 declared as follows: “The facts, as I recall them, are these. I was persuaded by my friend,

subsequently, John Edwards made a good recovery. And had no problems with regards... following his operation. Which he could have had. Because of adhesions and…other problems. So I kept a little bit of a close eye on him, for a few months after that. But he made a full recovery.” On that occasion, Francis Bacon gave Brian Hayhow two pencil drawings portraying two figures as a gift. Both drawings are signed by Francis Bacon, and are identical in both graphic signs and in the signature to those that constitute the “corpus” of drawings given by Francis Bacon to Cristiano Lovatelli Ravarino as a gift. From that time forward, Brian Hayhow became friends with Francis Bacon, spending time together regularly until the artist’s death. Brian Hayhow also noted that Francis Bacon made a pencil drawing of his daughter that showed her getting out of the swimming pool at Margaret Skawinski-Sheaser’s house: this drawing is conserved inside a catalogue that Francis Bacon gave the doctor as a gift together with the first two drawings. The aforementioned circumstances were confirmed on the same day (and documented in the same manner, through video recording) by Lyndsay Hayhow, barrister and wife of Brian, as well as by Margaret Skawinski-Sheaser, a close friend of Francis Bacon’s (as is demonstrated through the numerous photographs portraying the two together).

• The drawings have been examined and studied by internationallyrecognized art historians and critics including: Giorgio Soavi, Edward Lucie Smith, Vittorio Sgarbi, Peini Beatrice Hsieh director of the museum of modern art in Kaohsiung, Taiwan, and formerly the director of Christie’s in Asia- and Rudy Chiappini, the curator of the first exibition of Francis Bacon works after his death in 1993 in Museum of Modern Art in Lugano, then in 1974 in Metropolitan Museum of Art in New York and, at least, in Royal Palace, Milan, in 2008.

the art dealer Edward Bigden to meet a man called Ian Collins in Debenham, Suffolk, and take a look at the Bacon drawings which he had in his possession. At that time, Edward will recall the date, but some time in 2008 I think, I did not know that these drawings had come through David Edwards and had belonged to Cristiano Ravarino. I thought they were right (this is only a personal opinion, and one which I uphold) and though not an expert on Bacon, I am an art historian, and I was acquainted with Martin Harrison, so one day I called Harrison and Edward and I arranged to meet him at his home and to show him about • In September 2011, in Monte Carlo, several drawings from 6 drawings. Edward will recall the date, but we met Harrison Cristiano Lovatelli Ravarino’s collection were closely examined at his home near Westbourne Grove/Paddington, a mews house by David Nahmad, recognized as one of the world’s foremost I recall, and this was at the time when the Catalogue Raisonné art merchants and collectors, who identified them as authentic was being started. Edward and I showed him the contents of the Francis Bacon artworks. portfolio, Harrison’s wife was present, and indeed, Harrison seemed perfectly convinced that the drawings were indeed by • The drawings in question have been the focus of three international Bacon.” conventions, held respectively in Buenos Aires (Espacio de arte SIGEN, October 22, 2010); London (Open Forum, “The Gallery • Testimonies from Brian Hayhow, Lyndsay Hayhow and Margaret in Cork Street,” February 8, 2012); and Prague (conference held Skawinski-Sheaser. at “The Gate Gallery,” June 26, 2012). Brian Hayhow, a medical surgeon by profession, declared that he performed an emergency operation on John Edwards in • The drawings in the collection have been exhibited in museums 1986 to cure his appendicitis, and on that occasion first met and art galleries in the following cities: Venice (2009-2011); Francis Bacon. On November 2012, 2012, Brian Hayhow made Zurich (2009); Milan (2010); Cento-Ferrara, Italy (2010); Évorathe following statements during a video interview, declaring Lisbon, Portugal (2010); Buenos Aires: Borges Museum, Espacio as follows: “I saw him when he came out. And I remember de arte SIGEN (2010); Berlin (2010); Paris (2011); Santiago, Francis and John were walking very slowly and carefully… A Chile (2011); London (2011); Kaohsiung-Taiwan (2012); Prague big table – I think in a conservatory area – was strewn with (2012); Aguascalientes, Mexico (2012-2013); San Paolo (Brazil), books, magazines, drawings…and Francis picked them up to Paco des Artes Museum ( 2014). move them away. ‘They’re nothing!’ (said Francis) Because, I The exhibition held in Cento-Ferrara was sponsored by the Italian suspect that he did not want to be praised… And he said ‘I am Ministry of Cultural Heritage and Activities. The exhibition grateful to you… Thank you for saving me.’ And I was slightly held at SIGEN in Buenos Aires was sponsored by the Argentine embarrassed. But I was also very, very happy and pleased. And, Ministry of Culture and the Argentine National Bank.

• Critical essays focusing on the drawings in Cristiano Lovatelli Ravarino’s collection have been written by: Giorgio Soavi, Edward Lucie Smith, Alessandro Riva, Vittorio Sgarbi, Duccio Trombadori, Raffaele Gavarro, Horacio de Sosa Cordero, Serena Baccaglini and Peini Beatrice Hsieh. • In 2008 the history of the drawings, derived from the evidences at trial, as well as ones accumulated after following the trial’s conclusion, were gathered together and published in a book entitled “The Tip of an Iceberg”, by Umberto Guerini.

• In January 2012, the legal proceedings from the trial, including the sentence, were published verbatim in a volume entitled “La storia recente dei disegni italiani di Francis Bacon” (The Recent History of the Italian Drawings of Francis Bacon). This publication also includes correspondence with one of the most important English art historians, Brian Sewell, who was a friend of Francis Bacon and who, following a critical examination and after having previously expressed opinions against the drawings, concluded that the only declaration he could make was that he “had never seen anything like them before.”