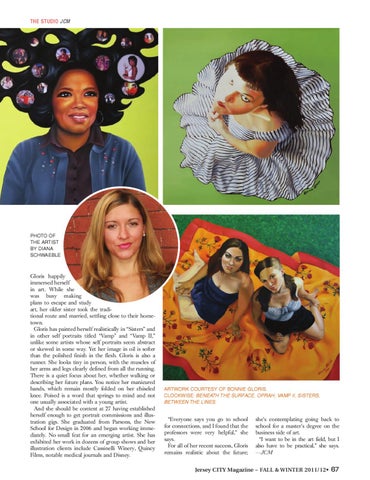 PHOTO OF THE ARTIST BY DIANA SCHWAEBLE

Gloris happily immersed herself in art. While she was busy making plans to escape and study art, her older sister took the traditional route and married, settling close to their hometown. Gloris has painted herself realistically in “Sisters” and in other self portraits titled “Vamp” and “Vamp II,” unlike some artists whose self portraits seem abstract or skewed in some way. Yet her image in oil is softer than the polished finish in the flesh. Gloris is also a runner. She looks tiny in person, with the muscles of her arms and legs clearly defined from all the running. There is a quiet focus about her, whether walking or describing her future plans. You notice her manicured hands, which remain mostly folded on her chiseled knee. Poised is a word that springs to mind and not one usually associated with a young artist. And she should be content at 27 having established herself enough to get portrait commissions and illustration gigs. She graduated from Parsons, the New School for Design in 2006 and began working immediately. No small feat for an emerging artist. She has exhibited her work in dozens of group shows and her illustration clients include Cassinelli Winery, Quincy Films, notable medical journals and Disney.

ARTWORK COURTESY OF BONNIE GLORIS. CLOCKWISE: BENEATH THE SURFACE, OPRAH, VAMP II, SISTERS, BETWEEN THE LINES.

“Everyone says you go to school for connections, and I found that the professors were very helpful,” she says. For all of her recent success, Gloris remains realistic about the future;

she’s contemplating going back to school for a master’s degree on the business side of art. “I want to be in the art field, but I also have to be practical,” she says. —JCM