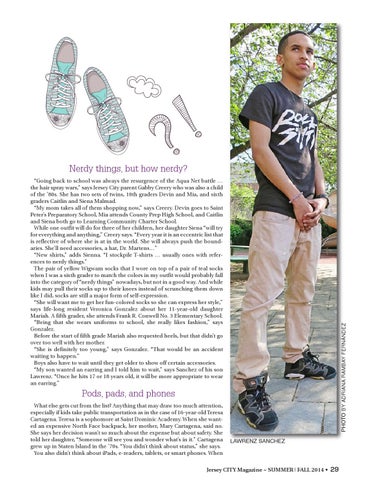 Nerdy things, but how nerdy?

“Going back to school was always the resurgence of the Aqua Net battle … the hair spray wars,” says Jersey City parent Gabby Creery who was also a child of the ’80s. She has two sets of twins, 10th graders Devin and Mia, and sixth graders Caitlin and Siena Malmad. “My mom takes all of them shopping now,” says Creery. Devin goes to Saint Peter’s Preparatory School, Mia attends County Prep High School, and Caitlin and Siena both go to Learning Community Charter School. While one outfit will do for three of her children, her daughter Siena “will try for everything and anything,” Creery says. “Every year it is an eccentric list that is reflective of where she is at in the world. She will always push the boundaries. She’ll need accessories, a hat, Dr. Martens…” “New shirts,” adds Sienna. “I stockpile T-shirts … usually ones with references to nerdy things.” The pair of yellow Wigwam socks that I wore on top of a pair of teal socks when I was a sixth grader to match the colors in my outfit would probably fall into the category of “nerdy things” nowadays, but not in a good way. And while kids may pull their socks up to their knees instead of scrunching them down like I did, socks are still a major form of self-expression. “She will want me to get her fun-colored socks so she can express her style,” says life-long resident Veronica Gonzalez about her 11-year-old daughter Mariah. A fifth grader, she attends Frank R. Conwell No. 3 Elementary School. “Being that she wears uniforms to school, she really likes fashion,” says Gonzalez. Before the start of fifth grade Mariah also requested heels, but that didn’t go over too well with her mother. “She is definitely too young,” says Gonzalez. “That would be an accident waiting to happen.” Boys also have to wait until they get older to show off certain accessories. “My son wanted an earring and I told him to wait,” says Sanchez of his son Lawrenz. “Once he hits 17 or 18 years old, it will be more appropriate to wear an earring.”

Pods, pads, and phones What else gets cut from the list? Anything that may draw too much attention, especially if kids take public transportation as in the case of 16-year-old Teresa Cartagena. Teresa is a sophomore at Saint Dominic Academy. When she wanted an expensive North Face backpack, her mother, Mary Cartagena, said no. She says her decision wasn’t so much about the expense but about safety. She told her daughter, “Someone will see you and wonder what’s in it.” Cartagena grew up in Staten Island in the ’70s. “You didn’t think about status,” she says. You also didn’t think about iPads, e-readers, tablets, or smart phones. When