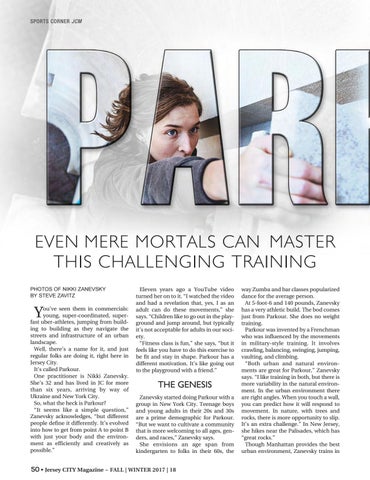 ou’ve seen them in commercials: young, super-coordinated, superfast uber-athletes, jumping from building to building as they navigate the streets and infrastructure of an urban landscape. Well, there’s a name for it, and just regular folks are doing it, right here in Jersey City. It’s called Parkour. One practitioner is Nikki Zanevsky. She’s 32 and has lived in JC for more than six years, arriving by way of Ukraine and New York City. So, what the heck is Parkour? “It seems like a simple question,” Zanevsky acknowledges, “but different people define it differently. It’s evolved into how to get from point A to point B with just your body and the environment as efficiently and creatively as possible.”

Eleven years ago a YouTube video turned her on to it. “I watched the video and had a revelation that, yes, I as an adult can do these movements,” she says. “Children like to go out in the playground and jump around, but typically it’s not acceptable for adults in our society. “Fitness class is fun,” she says, “but it feels like you have to do this exercise to be fit and stay in shape. Parkour has a different motivation. It’s like going out to the playground with a friend.”

THE GENESIS Zanevsky started doing Parkour with a group in New York City. Teenage boys and young adults in their 20s and 30s are a prime demographic for Parkour. “But we want to cultivate a community that is more welcoming to all ages, genders, and races,” Zanevsky says. She envisions an age span from kindergarten to folks in their 60s, the

way Zumba and bar classes popularized dance for the average person. At 5-foot-6 and 140 pounds, Zanevsky has a very athletic build. The bod comes just from Parkour. She does no weight training. Parkour was invented by a Frenchman who was influenced by the movements in military-style training. It involves crawling, balancing, swinging, jumping, vaulting, and climbing. “Both urban and natural environments are great for Parkour,” Zanevsky says. “I like training in both, but there is more variability in the natural environment. In the urban environment there are right angles. When you touch a wall, you can predict how it will respond to movement. In nature, with trees and rocks, there is more opportunity to slip. It’s an extra challenge.” In New Jersey, she hikes near the Palisades, which has “great rocks.” Though Manhattan provides the best urban environment, Zanevsky trains in