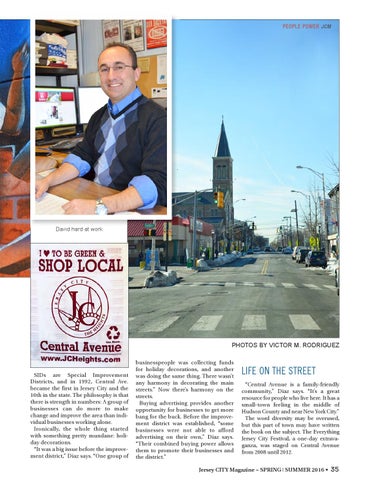 SIDs are Special Improvement Districts, and in 1992, Central Ave. became the first in Jersey City and the 10th in the state. The philosophy is that there is strength in numbers: A group of businesses can do more to make change and improve the area than individual businesses working alone. Ironically, the whole thing started with something pretty mundane: holiday decorations. “It was a big issue before the improvement district,” Diaz says. “One group of

businesspeople was collecting funds for holiday decorations, and another was doing the same thing. There wasn’t any harmony in decorating the main streets.” Now there’s harmony on the streets. Buying advertising provides another opportunity for businesses to get more bang for the buck. Before the improvement district was established, “some businesses were not able to afford advertising on their own,” Diaz says. “Their combined buying power allows them to promote their businesses and the district.”

LIFE ON THE STREET “Central Avenue is a family-friendly community,” Diaz says. “It’s a great resource for people who live here. It has a small-town feeling in the middle of Hudson County and near New York City.” The word diversity may be overused, but this part of town may have written the book on the subject. The Everything Jersey City Festival, a one-day extravaganza, was staged on Central Avenue from 2008 until 2012.