BAYONNE Life on the Peninsula 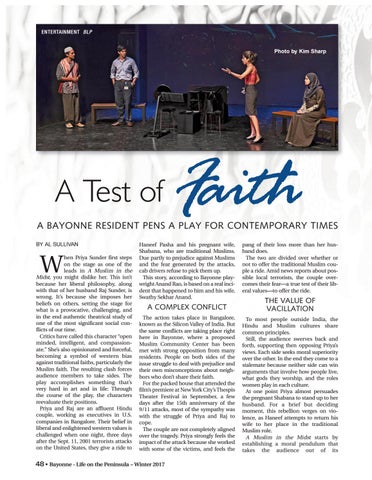 hen Priya Sunder first steps on the stage as one of the leads in A Muslim in the Midst, you might dislike her. This isn’t because her liberal philosophy, along with that of her husband Raj Sunder, is wrong. It’s because she imposes her beliefs on others, setting the stage for what is a provocative, challenging, and in the end authentic theatrical study of one of the most significant social conflicts of our time. Critics have called this character “open minded, intelligent, and compassionate.” She’s also opinionated and forceful, becoming a symbol of western bias against traditional faiths, particularly the Muslim faith. The resulting clash forces audience members to take sides. The play accomplishes something that’s very hard in art and in life: Through the course of the play, the characters reevaluate their positions. Priya and Raj are an affluent Hindu couple, working as executives in U.S. companies in Bangalore. Their belief in liberal and enlightened western values is challenged when one night, three days after the Sept. 11, 2001 terrorists attacks on the United States, they give a ride to

Haneef Pasha and his pregnant wife, Shabana, who are traditional Muslims. Due partly to prejudice against Muslims and the fear generated by the attacks, cab drivers refuse to pick them up. This story, according to Bayonne playwright Anand Rao, is based on a real incident that happened to him and his wife, Swathy Sekhar Anand.

pang of their loss more than her husband does. The two are divided over whether or not to offer the traditional Muslim couple a ride. Amid news reports about possible local terrorists, the couple overcomes their fear—a true test of their liberal values—to offer the ride.

THE VALUE OF VACILLATION

The action takes place in Bangalore, known as the Silicon Valley of India. But the same conflicts are taking place right here in Bayonne, where a proposed Muslim Community Center has been met with strong opposition from many residents. People on both sides of the issue struggle to deal with prejudice and their own misconceptions about neighbors who don’t share their faith. For the packed house that attended the film’s premiere at New York City’s Thespis Theater Festival in September, a few days after the 15th anniversary of the 9/11 attacks, most of the sympathy was with the struggle of Priya and Raj to cope. The couple are not completely aligned over the tragedy. Priya strongly feels the impact of the attack because she worked with some of the victims, and feels the

To most people outside India, the Hindu and Muslim cultures share common principles. Still, the audience swerves back and forth, supporting then opposing Priya’s views. Each side seeks moral superiority over the other. In the end they come to a stalemate because neither side can win arguments that involve how people live, what gods they worship, and the roles women play in each culture. At one point Priya almost persuades the pregnant Shabana to stand up to her husband. For a brief but deciding moment, this rebellion verges on violence, as Haneef attempts to return his wife to her place in the traditional Muslim role. A Muslim in the Midst starts by establishing a moral pendulum that takes the audience out of its

BAYONNE Life on the Peninsula