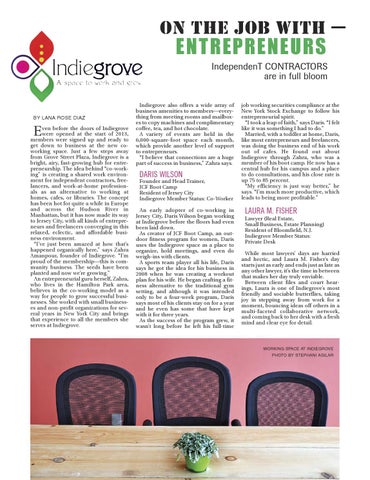 ON THE JOB WITH —

IndependenT CONTRACTORS are in full bloom

ven before the doors of Indiegrove were opened at the start of 2013, members were signed up and ready to get down to business at the new coworking space. Just a few steps away from Grove Street Plaza, Indiegrove is a bright, airy, fast-growing hub for entrepreneurship. The idea behind “co-working” is creating a shared work environment for independent contractors, freelancers, and work-at-home professionals as an alternative to working at homes, cafes, or libraries. The concept has been hot for quite a while in Europe and across the Hudson River in Manhattan, but it has now made its way to Jersey City, with all kinds of entrepreneurs and freelancers converging in this relaxed, eclectic, and affordable business environment. “I’ve just been amazed at how that’s happened organically here,” says Zahra Amanpour, founder of Indiegrove. “I’m proud of the membership—this is community business. The seeds have been planted and now we’re growing.” An entrepreneurial guru herself, Zahra, who lives in the Hamilton Park area, believes in the co-working model as a way for people to grow successful businesses. She worked with small businesses and non-profit organizations for several years in New York City and brings that experience to all the members she serves at Indiegrove.

Indiegrove also offers a wide array of business amenities to members—everything from meeting rooms and mailboxes to copy machines and complimentary coffee, tea, and hot chocolate. A variety of events are held in the 6,000-square-foot space each month, which provide another level of support to entrepreneurs. “I believe that connections are a huge part of success in business,” Zahra says.

Founder and Head Trainer, JCF Boot Camp Resident of Jersey City Indiegrove Member Status: Co-Worker An early adopter of co-working in Jersey City, Daris Wilson began working at Indiegrove before the floors had even been laid down. As creator of JCF Boot Camp, an outdoor fitness program for women, Daris uses the Indiegrove space as a place to organize, hold meetings, and even do weigh-ins with clients. A sports team player all his life, Daris says he got the idea for his business in 2008 when he was creating a workout plan for his wife. He began crafting a fitness alternative to the traditional gym setting, and although it was intended only to be a four-week program, Daris says most of his clients stay on for a year and he even has some that have kept with it for three years. As the success of the program grew, it wasn’t long before he left his full-time

job working securities compliance at the New York Stock Exchange to follow his entrepreneurial spirit. “I took a leap of faith,” says Daris. “I felt like it was something I had to do.” Married, with a toddler at home, Daris, like most entrepreneurs and freelancers, was doing the business end of his work out of cafes. He found out about Indiegrove through Zahra, who was a member of his boot camp. He now has a central hub for his campus and a place to do consultations, and his close rate is up 75 to 85 percent. “My efficiency is just way better,” he says. “I’m much more productive, which leads to being more profitable.”

LAURA M. FISHER Lawyer (Real Estate, Small Business, Estate Planning) Resident of Bloomfield, N.J. Indiegrove Member Status: Private Desk While most lawyers’ days are harried and hectic, and Laura M. Fisher’s day starts just as early and ends just as late as any other lawyer, it’s the time in between that makes her day truly enviable. Between client files and court hearings, Laura is one of Indiegrove’s most friendly and sociable butterflies, taking joy in stepping away from work for a moment, bouncing ideas off others in a multi-faceted collaborative network, and coming back to her desk with a fresh mind and clear eye for detail.