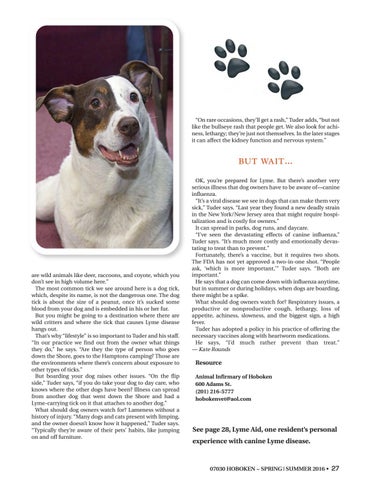 “On rare occasions, they’ll get a rash,” Tuder adds, “but not like the bullseye rash that people get. We also look for achiness, lethargy; they’re just not themselves. In the later stages it can affect the kidney function and nervous system.”

are wild animals like deer, raccoons, and coyote, which you don’t see in high volume here.” The most common tick we see around here is a dog tick, which, despite its name, is not the dangerous one. The dog tick is about the size of a peanut, once it’s sucked some blood from your dog and is embedded in his or her fur. But you might be going to a destination where there are wild critters and where the tick that causes Lyme disease hangs out. That’s why “lifestyle” is so important to Tuder and his staff. “In our practice we find out from the owner what things they do,” he says. “Are they the type of person who goes down the Shore, goes to the Hamptons camping? Those are the environments where there’s concern about exposure to other types of ticks.” But boarding your dog raises other issues. “On the flip side,” Tuder says, “if you do take your dog to day care, who knows where the other dogs have been? Illness can spread from another dog that went down the Shore and had a Lyme-carrying tick on it that attaches to another dog.” What should dog owners watch for? Lameness without a history of injury. “Many dogs and cats present with limping, and the owner doesn’t know how it happened,” Tuder says. “Typically they’re aware of their pets’ habits, like jumping on and off furniture.

OK, you’re prepared for Lyme. But there’s another very serious illness that dog owners have to be aware of—canine influenza. “It’s a viral disease we see in dogs that can make them very sick,” Tuder says. “Last year they found a new deadly strain in the New York/New Jersey area that might require hospitalization and is costly for owners.” It can spread in parks, dog runs, and daycare. “I’ve seen the devastating effects of canine influenza,” Tuder says. “It’s much more costly and emotionally devastating to treat than to prevent.” Fortunately, there’s a vaccine, but it requires two shots. The FDA has not yet approved a two-in-one shot. “People ask, ‘which is more important,’” Tuder says. “Both are important.” He says that a dog can come down with influenza anytime, but in summer or during holidays, when dogs are boarding, there might be a spike. What should dog owners watch for? Respiratory issues, a productive or nonproductive cough, lethargy, loss of appetite, achiness, slowness, and the biggest sign, a high fever. Tuder has adopted a policy in his practice of offering the necessary vaccines along with heartworm medications. He says, “I’d much rather prevent than treat.” — Kate Rounds