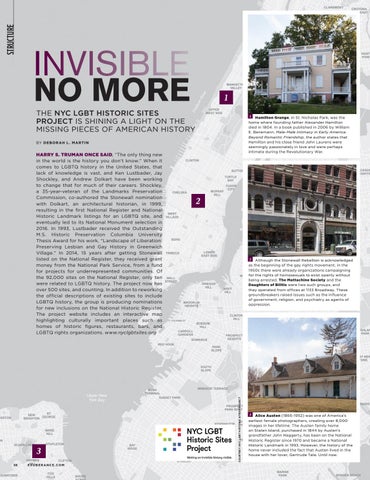 1 Hamilton Grange, in St. Nicholas Park, was the home where founding father Alexander Hamilton died in 1804. In a book published in 2006 by William E. Benemann, Male-Male Intimacy in Early America: Beyond Romantic Friendship, the author states that Hamilton and his close friend John Laurens were seemingly passionately in love and were perhaps intimate during the Revolutionary War.

2 Although the Stonewall Rebellion is acknowledged as the beginning of the gay rights movement, in the 1950s there were already organizations campaigning for the rights of homosexuals to exist openly without being arrested. The Mattachine Society and the Daughters of Bilitis were two such groups, and they operated from offices at 1133 Broadway. These groundbreakers raised issues such as the influence of government, religion, and psychiatry as agents of oppression.

HARRY S. TRUMAN ONCE SAID, “The only thing new in the world is the history you don’t know.” When it comes to LGBTQ history in the United States, that lack of knowledge is vast, and Ken Lustbader, Jay Shockley, and Andrew Dolkart have been working to change that for much of their careers. Shockley, a 35-year-veteran of the Landmarks Preservation Commission, co-authored the Stonewall nomination with Dolkart, an architectural historian, in 1999, resulting in the first National Register and National Historic Landmark listings for an LGBTQ site, and eventually led to its National Monument selection in 2016. In 1993, Lustbader received the Outstanding M.S. Historic Preservation Columbia University Thesis Award for his work, “Landscape of Liberation: Preserving Lesbian and Gay History in Greenwich Village.” In 2014, 15 years after getting Stonewall listed on the National Register, they received grant money from the National Park Service, from a fund for projects for underrepresented communities. Of the 92,000 sites on the National Register, only ten were related to LGBTQ history. The project now has over 500 sites, and counting. In addition to reworking the official descriptions of existing sites to include LGBTQ history, the group is producing nominations for new inclusions on the National Historic Register. The project website includes an interactive map highlighting culturally important places such as homes of historic figures, restaurants, bars, and LGBTQ rights organizations. www.nyclgbtsites.org

3 Alice Austen (1866-1952) was one of America’s earliest female photographers, creating over 8,000 images in her lifetime. The Austen family home on Staten Island, purchased in 1844 by Austen’s grandfather John Haggerty, has been on the National Historic Register since 1970 and became a National Historic Landmark in 1993. However, the history of the home never included the fact that Austen lived in the house with her lover, Gertrude Tate. Until now. 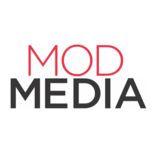