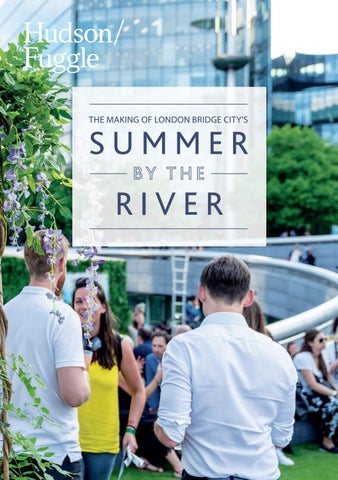 “Look no further if

you’re angling for some riverside revels this summer. Secret London

“Summer by the River will be the ultimate London experience this summer. Heart FM

to enjoy a film or two: perched next to Tower Bridge and in the shadow of City Hall. Don’t be surprised to see the Mayor leaning out of his office window to join in with ‘This is Me’. Time Out London

Creating a destination Stretching for half a mile along the Thames, between London Bridge and Tower Bridge, London Bridge City (LBC) boasts a rich history, breathtaking architecture and spectacular views. But until 2014 – when LBC asked us to help put the estate on the map – very few people knew where or what it was. From the start we understood that the annual summer festival, with its eclectic mix of free music, theatre and film, was key to LBC’s evolution. And over the last three years we have helped to transform it from a series of unrelated events into Summer by the River — a dynamic festival brand.

Developing the story We started work on Summer by the River in November – developing a narrative that would inform every aspect of the festival. This year, we took our inspiration from the halcyon days of the 1920s – P.G. Wodehouse, Evelyn Waugh and the quintessential English riverside regatta. We developed mood boards and from these, ideas for the identity, print, social media, environmental branding and props.

They’ll bring #summervibes to London Bridge City… Pimms at the ready for this one, chaps and chapettes. Secret London

Bringing it to life We developed the 2018 Summer by the River identity in static and animated formats for print, digital and social media. We wanted festivalgoers to engage with the narrative at every touch point, from our first Summer by the River tweet to launch night at The Scoop. We achieved this through: • period-specific literary quotes on large-format banners around the estate • a 40-page, A6 festival guide • press invites for launch night featuring packets of lavender seeds • animated GIFs for LBC’s digital notice boards and website, as well as branded headers, content and filters for Twitter, Facebook, Instagram, Spotify and Snapchat • environmental branding, such as signage, posters, wall vinyls and bunting • props, including oversized deckchairs and astro turf sofas • a corner of Hay’s Galleria styled with a lawn, picnic tables and a white picket fence.

As always, Bar by the River was the centrepiece, evoking the 1920s with planters full of purple wisteria and lavender. Our nod to now was the branded, landscaped selfie wall that played an integral role in our social media campaign. Next to the bar, the stage was covered in a living wall and featured a digital backdrop displaying the animated festival logo on loop. Hudson Fuggle 6

Drawing a crowd Lead up

You only get one chance to make a first impression. Launch night sets the tone for the weeks that follow and needs to draw a crowd.

We built a buzz with daily Summer by the River content on Twitter, Facebook and Instagram, including branded teasers, 1920sâ&amp;#x20AC;&amp;#x2122; quotes, GIFs, animations and a daily countdown in launch week. We posted sneak peaks at the festival build, using time-lapse videos and photographs. We also shared press and influencersâ&amp;#x20AC;&amp;#x2122; content to build engagement.

We then edited launch night highlights into a short film, creating a Summer by the River promo for use across all digital and social channels.

Festival Most festivals come and go in a weekend; we had to keep Summer by the River buzzing for three months. We achieved this through: • competitions, generating 40,000 additional impressions across LBC’s social channels • paid social advertising, targeting specific audiences to ensure optimum engagement • a bespoke Spotify playlist, streaming 1920s tunes at Bar by the River and encouraging followers to add their favourites • daily festival visits, capturing the atmosphere through live Instagram stories • regular updates on festival news.

Summer by the River