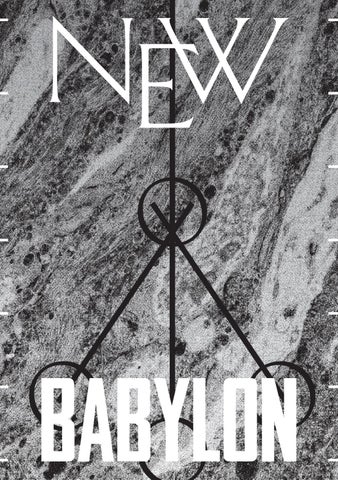 ‘THE PHRASE ‘DATA IS THE NEW OIL.’ WAS COINED BY CLINE HUMBEY IN 2006 – A BRITISH MATHEMATICIAN AND ARCHITECT OF THE TESCO CLUB CARD. THIS METAPHOR FOR DATA WENT ON TO BECOME REPEATED AND AMPLIFIED BY VARIOUS MARKETING COMPANIES, BUSINESSES AND GOVERNMENT LEADERS. UTILISING THE TERM AS A FORM OF VALUE FOR DATA RATHER THAN ITS INITIAL MEANING – WHICH WAS THAT RAW DATA NEEDS TO BE EXTRACTED AND PROCESSED MUCH LIKE OIL IN ORDER TO UNDERSTAND IT AND GLEAN IT’S TRUE VALUE.’

AN OPAQUE TOPOGRAPHY OF DATA SETS Hello, how can I help you? New Babylon is a revolutionary site of mining technologies New Babylon is an infinite network. A lucrative vein A vast ore of data streams. To be extracted. Tapped in. Pound to pound. Point to point. Sifted New Babylon is the 21st Century prospector. Whose deposit is everywhere and limits, nowhere A convenient resource. Personalised and unique to you. You are strand of DNA, Stretched and pulled across the system, a stringy mess of data sets Connecting into a syntax of infinite interpretations. Pound to pound. Point to point. Sifted The body is a site of extraction. A resource to mine. Cultivated and sifted through, slipping through the seams. Bits of information traversing through the system Pound to pound. Point to point. Sifted

Historical mining sites were often visualised through wood cut diagrams. The mineral caverns, viens, ores and frissions deep underground mapped out. CT scans give us a unique insight into the workings and visualising of the human body. Extracting medical CT scans and microscopic imagery the prints reimagine the body as a topographical site to mine.

REFINING _­ _AN OPAQUE TOPOGRAPHY OF DATA SETS ­___DURATION 10 MINUTES. ­__­__DUAL CHANNEL DIGITAL VIDEO. Splicing together a range of historic footage of mining practices and data centres. Alongside made CGI imagery and a commentary employing data and mining terminology. The work explores and contrasts various modes of extraction, presenting historic mining examples as a metaphor for the extraction of information and health data.

The refuse between mind and matter is Data extraction and collection is a phenomenon which exists in the digital network. Difficult to visualise. It becomes intangible with the technologies and organisations collecting our data , inscrutable. Data mining is defined as ‘the practice of examining large preexisting databases in order to generate new information’. As our pulse, steps and likes are collected they are stretched and sifted through the opaque digital systems, filtered through and refined into profiles which we are denied access to. As our health becoming increasingly quantified and monitored through apps we have collected a range of data samples, using their algorithmic data created computer models which create these randomised rock-like shapes.

CURATORIAL TOUR _SATURDAY 14TH SEPTEMBER, 4PM On the 14st September 2065 please join creative collaborators Sophie Huckfield and Lucy Hutchinson for a tour of their exhibition ‘New Babylon’. This historic exhibition creatively examines criminal data mining, focusing on the period 2017-2020. Investigating the use of healthcare data as a social, political and economic power before its decline in 2030. Taking the form of a data production line, the exhibition reinterprets the excavation, mining, and resulting products of the healthcare data industry before its steady decline in 2030.

New Babylon is the resulting exhibition of Fashion Space Gallery’s 2019 designersin-residence Sophie Huckfield and Lucy Hutchinson. During the residency they have been exploring ways in which digital technologies impact healthcare, thinking about how these technologies, their branding, language and funding contribute to the development of healthcare as a commodity. For their exhibition at Arcade East they have employed surrealist methodologies and metaphors which explore the human body as a mining site. In ‘a world ruled by fictions of every kind’ (JG Ballard) they aim to explore how storytelling can be used to not only speculate but to empower and actively shape reality. Informed by workshops and collaborations with researchers at LCF they have developed a range of works including; 3D printed rocks composed of personalised health data, a video work exploring how bodily data is refined via contemporary healthcare apps – constructed from ‘cut-up’ language, found footage and CGI animation. Alongside aluminum prints mimicking traditional imagery of geographical mining sites and rock samples, using CT scans and microscopic imagery of the body as sites for extraction.

ARTISTS FILM SCREENING _SATURDAY 14TH SEPTEMBER, 5-6PM The tour will be followed by a film screening of selected artist’s films who explored ideas around fiction, speculation, technology, health, the body and ecology during the early 20th Century.

NOW, MORE THAN EVER, AS THE NEW DIGITAL MEDIA TECHNOLOGIES BECOME EVER MORE MOBILE AND WEARABLE, AS WE CARRY THEM ON OUR BODIES THROUGHOUT THE DAY OR EVEN THROUGHOUT THE NIGHT – INDEED AS SOME CAN NOW BE SWALLOWED OR STUCK UPON ONE’S SKIN AS PAPER-THIN PATCHES – THEY ARE BECOMING PART OF US, PART OF OUR BODIES AS PROSTHETICS OF THE SELF, PART OF OUR IDENTITIES AS THEY STORE MORE DATA ABOUT OUR EXPERIENCES, OUR SOCIAL RELATIONSHIPS AND ENCOUNTERS AND OUR BODILY FUNCTIONING

CONVEYOR Sophie Huckfield and Lucy Hutchinson are artists who work collectively under the name Conveyor. Conveyor employ surrealist methodologies to speculate and react against the ‘Black Box’ approach of scientific and technological research, reconfiguring how language and metaphors are used to interpret contemporary technologies and scientific practices. Lucy Hutchinson is an artist based in London, she has a research-based practice which looks at the relationship between technological histories and futures, the occult, economics and the body. Working in CGI, 3D printing, and drawing she uses multiple visual tools to challenge the status quo, often working with different areas in society to understand complex realities.

Sophie Huckfield is a transdisciplinary artist and engineer, based between London and Birmingham. Her collaborative practice meditates upon the way we think about the world shaped by the tools and technologies at our disposal. She employs traditional and experimental modes of production such as satire, traditional craft and writing, in order to interrogate opaque networks of production.

FASHION SPACE GALLERY RESIDENCY New Babylon was developed as part of the design residency at Fashion Space Gallery, London College of Fashion in 2019. The design residency takes place every year to support emerging design practices in fashion or associated fields. In particular, it supports those whose practice is experimental and hard to define. The residency seeks to encourage collaboration, and, where possible, partnerships with practitioners from other disciplines (e.g. science or graphics) can be facilitated to support the resident’s research.

The selected resident works collaboratively – assembling their own team or working with a team that Fashion Space Gallery helps to organise – bringing together the expertise of designers, technologists and scientists to produce visionary and impactful new work.

THANKS We would like to pass on our warmest thanks to the following people for their support during the residency.

In addition, we would also like to thank all of the workshop attendees who helped to collectively build visions of technological futures from multiple viewpoints and all of the artistâ&amp;#x20AC;&amp;#x2122;s who contributed to the film screening.

New Babylon is a publication which documents the work created for the London Fashion Space Gallery Artist in Residence 2019. Written by Sophie Huckfield and Lucy Hutchinson Design by Kieth Dodds