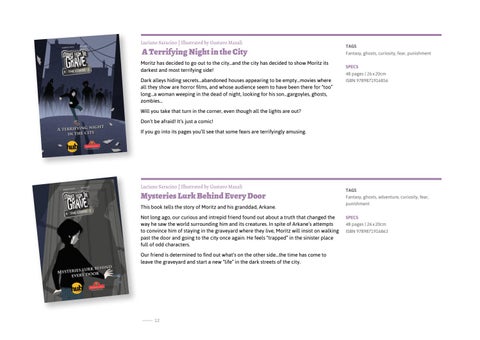 A Terrifying Night in the City Moritz has decided to go out to the city...and the city has decided to show Moritz its darkest and most terrifying side! Dark alleys hiding secrets...abandoned houses appearing to be empty...movies where all they show are horror films, and whose audience seem to have been there for “too” long...a woman weeping in the dead of night, looking for his son...gargoyles, ghosts, zombies...

Will you take that turn in the corner, even though all the lights are out? Don’t be afraid! It’s just a comic! If you go into its pages you’ll see that some fears are terrifyingly amusing.

Mysteries Lurk Behind Every Door This book tells the story of Moritz and his granddad, Arkane. Not long ago, our curious and intrepid friend found out about a truth that changed the way he saw the world surrounding him and its creatures. In spite of Arkane’s attempts to convince him of staying in the graveyard where they live, Moritz will insist on walking past the door and going to the city once again. He feels “trapped” in the sinister place full of odd characters. Our friend is determined to find out what’s on the other side...the time has come to leave the graveyard and start a new “life” in the dark streets of the city.