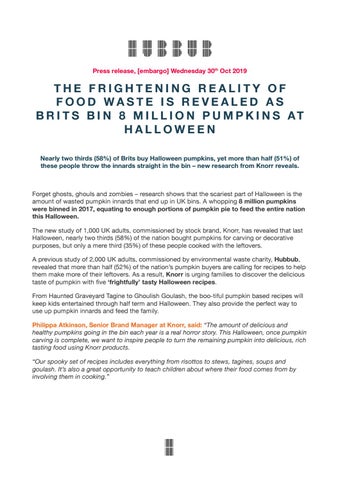 THE FRIGHTENING REALITY OF FOOD WASTE IS REVEALED AS B R I T S B I N 8 M I L L I O N P U M P K I N S AT HALLOWEEN Nearly two thirds (58%) of Brits buy Halloween pumpkins, yet more than half (51%) of these people throw the innards straight in the bin – new research from Knorr reveals.

Forget ghosts, ghouls and zombies – research shows that the scariest part of Halloween is the amount of wasted pumpkin innards that end up in UK bins. A whopping 8 million pumpkins were binned in 2017, equating to enough portions of pumpkin pie to feed the entire nation this Halloween. The new study of 1,000 UK adults, commissioned by stock brand, Knorr, has revealed that last Halloween, nearly two thirds (58%) of the nation bought pumpkins for carving or decorative purposes, but only a mere third (35%) of these people cooked with the leftovers. A previous study of 2,000 UK adults, commissioned by environmental waste charity, Hubbub, revealed that more than half (52%) of the nation’s pumpkin buyers are calling for recipes to help them make more of their leftovers. As a result, Knorr is urging families to discover the delicious taste of pumpkin with five ‘frightfully’ tasty Halloween recipes. From Haunted Graveyard Tagine to Ghoulish Goulash, the boo-tiful pumpkin based recipes will keep kids entertained through half term and Halloween. They also provide the perfect way to use up pumpkin innards and feed the family. Philippa Atkinson, Senior Brand Manager at Knorr, said: “The amount of delicious and healthy pumpkins going in the bin each year is a real horror story. This Halloween, once pumpkin carving is complete, we want to inspire people to turn the remaining pumpkin into delicious, rich tasting food using Knorr products. “Our spooky set of recipes includes everything from risottos to stews, tagines, soups and goulash. It’s also a great opportunity to teach children about where their food comes from by involving them in cooking.”

Tessa Tricks, Creative Partner at Hubbub, said: “Halloween has become increasingly popular in the UK, but unlike those on the other side of the pond, many Brits aren’t cooking with their pumpkin carvings – instead they’re throwing them away. “This is contributing to the overwhelming amount of waste thrown away by UK households each year which is not only costly to the environment but also costs the average household with kids £810 per year. It’s great to see that Knorr is joining the #PumpkinRescue and highlighting the delicious and versatile recipes that can be made using pumpkins to UK shoppers.”

30th October 2019. A whopping 8 million pumpkins were binned in 2017, equating to enough portions of pumpkin pie to feed the entire nation t...

30th October 2019. A whopping 8 million pumpkins were binned in 2017, equating to enough portions of pumpkin pie to feed the entire nation t...