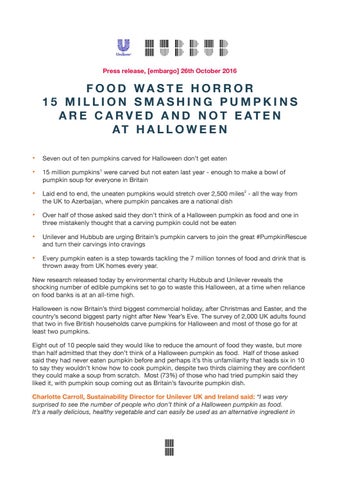 • Laid end to end, the uneaten pumpkins would stretch over 2,500 miles2 - all the way from the UK to Azerbaijan, where pumpkin pancakes are a national dish

• Every pumpkin eaten is a step towards tackling the 7 million tonnes of food and drink that is thrown away from UK homes every year.

New research released today by environmental charity Hubbub and Unilever reveals the shocking number of edible pumpkins set to go to waste this Halloween, at a time when reliance on food banks is at an all-time high. Halloween is now Britain’s third biggest commercial holiday, after Christmas and Easter, and the country’s second biggest party night after New Year’s Eve. The survey of 2,000 UK adults found that two in five British households carve pumpkins for Halloween and most of those go for at least two pumpkins. Eight out of 10 people said they would like to reduce the amount of food they waste, but more than half admitted that they don’t think of a Halloween pumpkin as food. Half of those asked said they had never eaten pumpkin before and perhaps it’s this unfamiliarity that leads six in 10 to say they wouldn’t know how to cook pumpkin, despite two thirds claiming they are confident they could make a soup from scratch. Most (73%) of those who had tried pumpkin said they liked it, with pumpkin soup coming out as Britain’s favourite pumpkin dish. Charlotte Carroll, Sustainability Director for Unilever UK and Ireland said: “I was very surprised to see the number of people who don’t think of a Halloween pumpkin as food. It’s a really delicious, healthy vegetable and can easily be used as an alternative ingredient in

many dishes that use carrots or butternut squash. We are urging Britain’s pumpkin carvers to turn their carvings into cravings and we’ve worked with our much loved household brands to create some wonderful recipes that we hope will help people feel more confident to try cooking pumpkin for the first time.” Trewin Restorick, Founder and CEO of Hubbub said “As Halloween continues to grow in popularity in the UK, it’s really important that this doesn’t create an ever larger mountain of food waste. We must recognise that pumpkins are a valuable source of food and not just for decoration, if we are to tackle the 7 million tonnes of food and drink wasted from British homes each year. Halloween is a great opportunity to help our children understand where food comes from and involve them in cooking a simple meal with their pumpkin carvings.” This year, Unilever and Hubbub are launching the biggest ever #PumpkinRescue, with over 40 cooking and composting events and festivals taking place across the country. More details of the events, along with tips on carving and cooking your pumpkin can be found at www.hubbub. org.uk/pumpkin-rescue

Based on average pumpkin diameter of 27cm (Sainsbury’s Halloween pumpkin)

Survey was conducted by Censuswide in September 2016 using a nationally representative sample of 2,000 respondents aged 16+ Food waste in the UK Almost 50% of the total amount of food thrown away in the UK comes from our homes. Over a year, 7 million tonnes of food and drink is thrown away, and more than half of this is food and drink we could have eaten. Fruit and veg make up 19% of avoidable food household food waste. Wasting this food costs the average household £470 a year, rising to £700 for a family with children, the equivalent of around £60 a month. If we all stop wasting food that could have been eaten, the benefit to the planet would be the equivalent of taking 1 in 4 cars off the road. Source: Love Food Hate Waste

ABOUT UNILEVER Unilever is one of the world’s leading suppliers of Food, Home and Personal Care products with sales in over 190 countries and reaching 2 billion consumers a day. It has 169,000 employees and generated sales of €53.3 billion in 2015. Over half (58%) of the company’s footprint is in developing and emerging markets. Unilever has more than 400 brands found in homes around the world, including Persil, Dove, Knorr, Domestos, Hellmann’s, Lipton, Wall’s, PG Tips, Ben &amp; Jerry’s, Marmite, Magnum and Lynx. Unilever’s Sustainable Living Plan commits to:

• Helping more than a billion people take action to improve their health and well-being by 2020.

• Halving the environmental impact of our products by 2030. • Enhancing the livelihoods of millions of people by 2020. Unilever was ranked number one in its sector in the 2015 Dow Jones Sustainability Index. In the FTSE4Good Index, it achieved the highest environmental score of 5. It led the list of Global Corporate Sustainability Leaders in the 2016 GlobeScan/SustainAbility annual survey for the sixth year running. Unilever was ranked the most sustainable food and beverage company in Oxfam’s Behind the Brands Scorecard in 2016 for the second year. For more information about Unilever and its brands, please visit www.unilever.com. For more information on the USLP: www.unilever.com/sustainable-living/

15 million pumpkins were carved but not eaten last year - enough to make a bowl of pumpkin soup for everyone in Britain. New research released by Hubbub and Unilever reveals the shocking number of edible pumpkins set to go to waste this Halloween, at a time when reliance on food banks is at an all-time high. 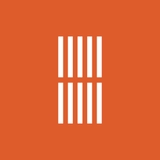