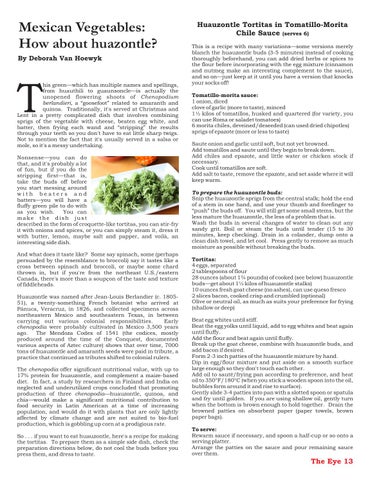 his green—which has multiple names and spellings, from huauthili to guaunsoncle—is actually the unopened flowering shoots of Chenopodium berlandieri, a “goosefoot” related to amaranth and quinoa. Traditionally, it&#39;s served at Christmas and Lent in a pretty complicated dish that involves combining sprigs of the vegetable with cheese, beaten egg white, and batter, then frying each wand and “stripping” the results through your teeth so you don&#39;t have to eat little sharp twigs. Not to mention the fact that it&#39;s usually served in a salsa or mole, so it&#39;s a messy undertaking. Nonsense—you can do that, and it&#39;s probably a lot of fun, but if you do the stripping first—that is, take the buds off before you start messing around with beaters and batters—you will have a fluffy green pile to do with as you wish. You can make the dish just described in the form of croquette-like tortitas, you can stir-fry it with onions and spices, or you can simply steam it, dress it with butter, lemon, maybe salt and papper, and voilà, an interesting side dish. And what does it taste like? Some say spinach, some (perhaps persuaded by the resemblance to broccoli) say it tastes like a cross between spinach and broccoli, or maybe some chard thrown in, but if you&#39;re from the northeast U.S./eastern Canada, there&#39;s more than a soupçon of the taste and texture of fiddleheads. Huauzontle was named after Jean-Louis Berlandier (c. 180551), a twenty-something French botanist who arrived at Pánuca, Veracruz, in 1826, and collected specimens across northeastern Mexico and southeastern Texas, in between carrying out various colonial responsibilities. Early chenopodia were probably cultivated in Mexico 3,500 years ago. The Mendoza Codex of 1541 (the codices, mostly produced around the time of the Conquest, documented various aspects of Aztec culture) shows that over time, 7000 tons of huauzontle and amaranth seeds were paid in tribute, a practice that continued as tributes shifted to colonial rulers. The chenopodia offer significant nutritional value, with up to 17% protein for huauzontle, and complement a maize-based diet. In fact, a study by researchers in Finland and India on neglected and underutilized crops concluded that promoting production of three chenopodia—huauzontle, quinoa, and chia—would make a significant nutritional contribution to food security in Latin American at a time of increasing population, and would do it with plants that are only lightly affected by climate change and are not suited to bio-fuel production, which is gobbling up corn at a prodigious rate. So . . . if you want to eat huauzontle, here&#39;s a recipe for making the tortitas. To prepare them as a simple side dish, check the preparation directions below, do not cool the buds before you press them, and dress to taste.

Huauzontle Tortitas in Tomatillo-Morita Chile Sauce (serves 6) This is a recipe with many variations—some versions merely blanch the huauzontle buds (3-5 minutes) instead of cooking thoroughly beforehand, you can add dried herbs or spices to the flour before incorporating with the egg mixture (cinnamon and nutmeg make an interesting complement to the sauce), and so on—just keep at it until you have a version that knocks your socks off! Tomatillo-morita sauce: 1 onion, diced clove of garlic (more to taste), minced 1½ kilos of tomatillos, husked and quartered (for variety, you can use Roma or saladet tomatoes) 6 morita chiles, deveined/deseeded (can used dried chipotles) sprigs of epazote (more or less to taste) Saute onion and garlic until soft, but not yet browned. Add tomatillos and saute until they begin to break down. Add chiles and epazote, and little water or chicken stock if necessary. Cook until tomatillos are soft. Add salt to taste, remove the epazote, and set aside where it will keep warm. To prepare the huauzontle buds: Snip the huauzontle sprigs from the central stalk; hold the end of a stem in one hand, and use your thumb and forefinger to “push” the buds off. You will still get some small stems, but the less mature the huauzontle, the less of a problem that is. Wash the buds in several changes of water to clean out any sandy grit. Boil or steam the buds until tender (15 to 30 minutes, keep checking). Drain in a colander, dump onto a clean dish towel, and let cool. Press gently to remove as much moisture as possible without breaking the buds. Tortitas: 4 eggs, separated 2 tablespoons of flour 28 ounces (about 1¾ pounds) of cooked (see below) huauzontle buds—get about 1½ kilos of huauzontle stalks) 10 ounces fresh goat cheese (no ashes), can use queso fresco 2 slices bacon, cooked crisp and crumbled (optional) Olive or neutral oil, as much as suits your preference for frying (shallow or deep) Beat egg whites until stiff. Beat the egg yolks until liquid, add to egg whites and beat again until fluffy. Add the flour and beat again until fluffy. Break up the goat cheese, combine with huauzontle buds, and add bacon if desired. Form 2-3 inch patties of the huauzontle mixture by hand. Dip in egg/flour mixture and put aside on a smooth surface large enough so they don&#39;t touch each other. Add oil to sauté/frying pan according to preference, and heat oil to 350°F/180°C (when you stick a wooden spoon into the oil, bubbles form around it and rise to surface). Gently slide 3-4 patties into pan with a slotted spoon or spatula and fry until golden. If you are using shallow oil, gently turn when the bottom is brown enough to hold together. Drain the browned patties on absorbent paper (paper towels, brown paper bags). To serve: Rewarm sauce if necessary, and spoon a half-cup or so onto a serving platter. Arrange the patties on the sauce and pour remaining sauce over them.

The Eye is an English magazine about living and loving life in Huatulco, Oaxaca, Mexico. 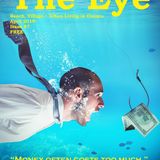