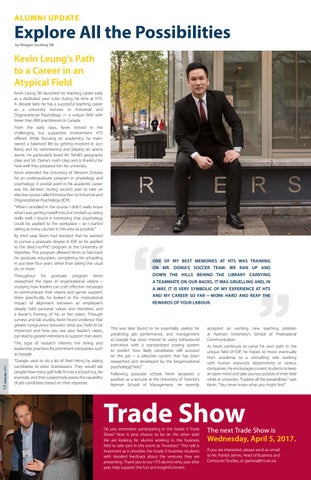 Explore All the Possibilities by Meagan Suckling ’08

Kevin Leung’s Path to a Career in an Atypical Field Kevin Leung ’06 launched his teaching career early as a dedicated peer tutor during his time at HTS. A decade later, he has a successful teaching career as a university lecturer in Industrial and Organizational Psychology — a unique field with fewer than 300 practitioners in Canada. From the early days, Kevin thrived in the challenging but supportive environment HTS offered. While focusing on academics, he maintained a balanced life by getting involved in Jazz Band, and by volunteering and playing on sports teams. He particularly loved Mr. Rehill’s geography class and Mr. Doma’s math class and is thankful for how well they prepared him for university. Kevin attended the University of Western Ontario for an undergraduate program in physiology and psychology. A pivotal point in his academic career was his decision during second year to take an elective course called Introduction to Industrial and Organizational Psychology (IOP). “When I enrolled in the course I didn’t really know what I was getting myself into, but I ended up doing really well. I found it interesting that psychology could be applied to the workplace – so I started taking as many courses in this area as possible.” By third year, Kevin had decided that he wanted to pursue a graduate degree in IOP, so he applied to the direct-to-PhD program at the University of Waterloo. This program allowed Kevin to fast-track his graduate education, completing his schooling in just over four years rather than taking the usual six, or more. Throughout his graduate program Kevin researched the topic of organizational visions – studying how leaders can craft effective messages to communicate their visions and garner support. More specifically, he looked at the motivational impact of alignment between an employee’s deeply held personal values and identities, and a leader’s framing of his or her vision. Through surveys and lab studies, Kevin found evidence that greater congruence between what you hold to be important and how you see your leader’s vision, can lead to greater intentions to support that vision.

This type of research informs the hiring and leadership practices for prominent companies such as Google. “Google used to do a lot of their hiring by asking candidates to solve brainteasers. They would ask people how many golf balls fit into a school bus, for example, and then subjectively assess the capability of job candidates based on their response.

ONE OF MY BEST MEMORIES AT HTS WAS TRAINING ON MR. DOMA’S SOCCER TEAM. WE RAN UP AND DOWN THE HILLS BEHIND THE LIBRARY CARRYING A TEAMMATE ON OUR BACKS. IT WAS GRUELLING AND, IN A WAY, IT IS VERY SYMBOLIC OF MY EXPERIENCE AT HTS AND MY CAREER SO FAR — WORK HARD AND REAP THE REWARDS OF YOUR LABOUR.

This was later found to be essentially useless for predicting job performance, and management at Google has since moved to using behavioural interviews with a standardized scoring system to predict how likely candidates will succeed on the job – a selection system that has been researched and developed by the [organizational psychology] field.” Following graduate school, Kevin accepted a position as a lecturer at the University of Toronto’s Rotman School of Management. He recently

accepted an exciting new teaching position at Ryerson University’s School of Professional Communication. As Kevin continues to carve his own path in the unique field of IOP, he hopes to move eventually from academia to a consulting role working with human resources departments at various companies. He encourages current students to keep an open mind and take courses outside of their field while at university. “Explore all the possibilities,” says Kevin. “You never know what you might find.”

Trade Show Do you remember participating in the Grade 9 Trade Show? Now is your chance to be on the other side! We are looking for alumni working in the business field to take part in this event as “investors.” This role is important as it provides the Grade 9 business students with detailed feedback about the ventures they are presenting. Thank you to our HTS alumni who, year after year, help support this fun and insightful event.

The next Trade Show is

Wednesday, April 5, 2017. If you are interested, please send an email to Mr. Patrick James, Head of Business and Computer Studies, at pjames@hts.on.ca.

An annual publication for the Alumni of Holy Trinity School. 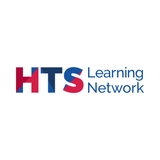