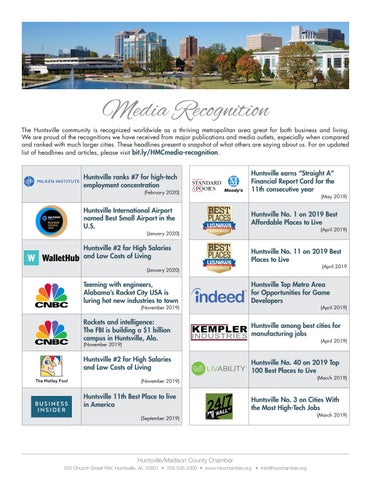 The Huntsville community is recognized worldwide as a thriving metropolitan area great for both business and living. We are proud of the recognitions we have received from major publications and media outlets, especially when compared and ranked with much larger cities. These headlines present a snapshot of what others are saying about us. For an updated list of headlines and articles, please visit bit.ly/HMCmedia-recognition.

Huntsville #2 for High Salaries and Low Costs of Living

Rockets and intelligence: The FBI is building a $1 billion campus in Huntsville, Ala.

Huntsville #2 for High Salaries and Low Costs of Living

Huntsville No. 3 on Cities With the Most High-Tech Jobs

Huntsville among Top 25 Most Educated Cities in America (July 2018)

Future of Tech is in Three Cities, including Huntsville (June 2018)

The New Age of Aerospace is in Huntsville, Alabama (February 2018)

Huntsville ranks No. 1 in job growth in the tech industry (September 2017)

Study ranks Madison among the most affordable cities to buy a home in the U.S. (January 2017)

Huntsville named among top 50 Most Affordable College Towns in the U.S. (April 2016)

Huntsville ranked #4 in “Top 25 U.S. Cities with the Lowest Cost of Living”

Huntsville is #2 City in the U.S. for Tech Jobs

Huntsville named as one of the South’s Best College Towns

Huntsville is among Top 17 Most Affordable U.S. Cities

Huntsville is one of top metros to “Power the U.S. Economy” (September 2015)

Huntsville is #1 in Employee Engagement by Forbes (August 2014)

Huntsville is among the top 10 Most Promising U.S. Tech Hubs to watch (January 2014)

Huntsville/Madison County is No. 4 on the list of America’s high tech hot spots (October 2013)

Huntsville named one of the Best Places to Live (October 2013)

Madison County ranked No. 7 in the country of a great place to live and find a job (August 2013)

Huntsville named No. 2 city in the South for computer programmers (August 2013)